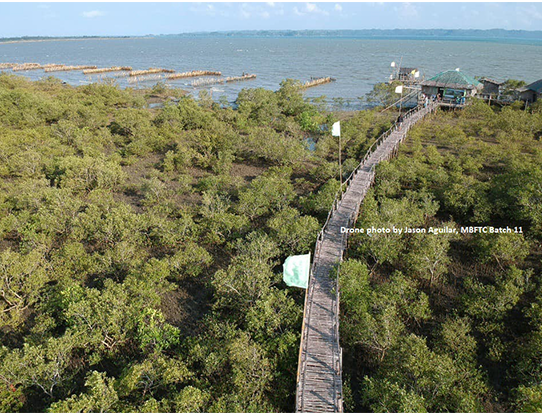 Globe has sealed a five-year partnership with the Zoological Society of London (ZSL) Philippines for the protection and rehabilitation of local mangrove forests which are being threatened by the conversion of vast areas into ponds for commercial fish and shrimp farming.

ZSL Philippines is one of the primary organizations focused on mangrove rehabilitation through abandoned fishpond reversion, green-gray technology intervention, and close collaboration with People’s Organizations (POs).

It was instrumental in the establishment of The Katunggan It Ibajay Ecopark in Aklan and another eco park in Pedada, Iloilo which now serves as ecological tourist spots of Panay island. With an established eco-tourism, proceeds of both eco parks go to the respective POs for their continuous operation, maintenance, and improvement.

As a long-time advocate of environmental protection and climate change prevention, Globe now focuses on mangrove conservation to step up its carbon sequestration efforts. This is aligned with its commitment to reduce its carbon footprint by actively supporting the Race To Zero global campaign spearheaded by the United Nations Framework Convention on Climate Change (UNFCCC) and COP26 Presidency and backed by the GSMA, the global mobile industry body, to lower greenhouse gas (GHG) emissions to net zero no later than 2050.

“For several years now, we have been actively protecting, restoring, and sustainably managing our forests to stop land degradation and biodiversity loss and to combat the effects of global warming. We are further stepping up our efforts to lessen the impact of our operations on the environment as we put into action our commitment to reduce our carbon footprint,” said Yoly Crisanto, Globe Chief Sustainability Officer and Senior Vice President for Corporate Communications.

In line with this, Globe decided to partner with ZSL Philippines which has proven expertise in mangrove ecosystems, to help with the conservation efforts starting with Iloilo which is considered as one of the top areas for mangrove rehabilitation programs due to its vulnerability to typhoons. The province also has a number of abandoned fishponds which make it suitable for rehabilitation efforts.

With the addition of ZSL to its list of partners, Globe will be able to further strengthen its reforestation efforts which started with the Cordillera mountain ranges and Arakan Valley and later on moved to Bukidnon and Zambales. The partnership with ZSL will bring Globe’s total forest supported areas to 161 hectares.

“ZSL Philippines welcomes the partnership with Globe Telecom as it provides the opportunity to promote the importance of sustainable mangrove rehabilitation and conservation through the participation of communities, government, business sector, and Globe’s subscribers. The application of ZSL-developed science-based protocols as guidance, the establishment of a long-term carbon off-set mechanism to measure, and the use of existing technology to develop and/or enhance the capacity of coastal resource managers are among the important features of the Globe Telecom and ZSL Philippines partnership for conservation and sustainability,” said Godof Villapando, Jr., Country Director of ZSL Philippines.

Mangroves are tropical trees found in coastal saline or brackish water. They are needed for climate stabilization since they can capture and store up to five times more carbon from the atmosphere than terrestrial forests. They also play a vital role in coastal protection, especially during a storm surge. With mangrove forests in place, the damage brought about by strong wind and waves becomes less destructive compared to a coastline with limited vegetation.

Likewise, mangroves are a source of valuable plant and animal products used as food, traditional herbal medicine, and other wood and forest products. They also serve as nesting grounds for hundreds of bird species and are home to a wide variety of reptiles, amphibians, mammals, and aquatic animals.

However, ZSL Philippines stated that since 1980, an estimated 20 to 35% of global mangroves have been lost, with current losses at around 1% per year as a result of human impact and natural disturbances.

As a purpose-driven company, Globe remains committed to the 10 UN Global Compact principles and contributes to 10 of the 17 UN Sustainable Development Goals such as UN SDG No. 13 which underscores the importance of climate action to save lives and livelihoods to address climate emergencies, and UN SDG No. 15 which promotes the protection, restoration and sustainable use of terrestrial ecosystems. Globe joins over 9,600 companies demonstrating commitment to environmental transparency by disclosing through CDP, a global non-profit organization that runs the world’s leading environmental disclosure platform.