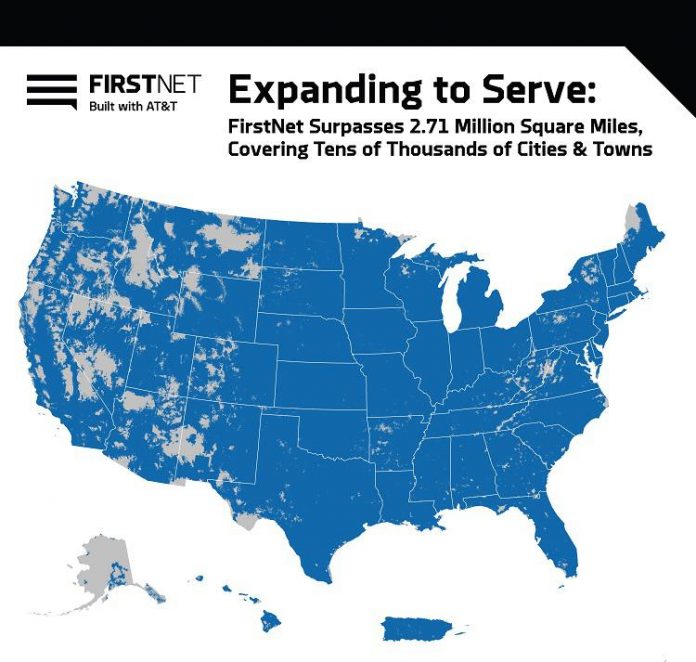 In 2020, we added nearly 100,000 square miles to the FirstNet coverage footprint (that’s like covering the entire state of Oregon).

Today, more than 15,000 agencies and organizations – accounting for more than 2 million connections nationwide – have subscribed to FirstNet. As FirstNet grows, more public safety agencies are turning to their network.

Recent agencies to sign on to FirstNet include Los Angeles Police Department, the third-largest municipal police department in the United States, which is connecting thousands of law enforcement officers and emergency personnel with FirstNet for the priority communications they require; and the City of Cambridge, part of the Boston metropolitan area, will equip its police, fire, EMS and other first responders with FirstNet, giving them the superior coverage for day-to-day response and life-saving missions.

Why is this important?

FirstNet already covers more than 99% of the U.S. population today. But we aren’t stopping there. FirstNet is built for all public safety. That means every first responder – career or volunteer; federal, tribal, state or local; urban, suburban or rural.

AT&T is actively extending the nationwide reach of FirstNet to give agencies large and small the reliable, unthrottled connectivity and modern communications tools they require – every day and in every emergency.

These new agencies subscribing to FirstNet, as well as others like the FBI and the U.S. Army, are a testament to the unparalleled capabilities first responders can only get on the network built specifically for them. Because no connection is more important than one that could help save a life.

Deploying public safety’s spectrum: Available nationwide, Band 14 – high-quality spectrum set aside by the U.S. government specifically for FirstNet – is providing public safety with a dedicated lane of connectivity when needed. So far, we’ve surpassed 90% of our Band 14 coverage target – well ahead of schedule.

And we’re going beyond our initial build commitment with the FirstNet Authority by installing Band 14 – public safety’s VIP lane – on new and existing AT&T cell sites, to reach several hundred thousand additional square miles with public safety’s Band 14 spectrum. That means first responders in densely populated areas like New York City and Raleigh-Durham, as well as those in communities like Ithaca, New York, which experiences a population surge as tens of thousands of students arrive each fall, will have protection against commercial traffic congestion. Plus, it allows public safety to take advantage of the high-power user equipment (HPUE) solution, FirstNet® MegaRange™, exclusively available on FirstNet using Band 14.

Launching purpose-built FirstNet sites: Over 1,000 new sites are planned as part of the initial FirstNet expansion to connect rural, remote and tribal areas – including areas where emergency responses have been previously challenged. So far, over half of these new sites have launched and every state in the nation is currently benefitting from the new wireless infrastructure. This includes places like the town of Otway in southern Appalachian Ohio; the area north of Gila National Forest along Route 60 near the Arizona-New Mexico border; and tribal communities such as the Nez Perce Reservation in Idaho, the Standing Rock Reservation located in North and South Dakota, and the Oglala Sioux Tribe’s Pine Ridge Reservation in southwest South Dakota.

AT&T is working closely with local telecom providers across the country. This collaboration is helping to more quickly address rural coverage needs and expand the reach of FirstNet for the public safety community.

Places to benefit so far include the Rocky Mountains of Wyoming (where several sites are located more than 10,000 feet above sea level), the Oklahoma panhandle and “The Driftless Region” of southwestern Wisconsin. After all, emergencies don’t know zip codes.

Expanding the dedicated FirstNet fleet: We have seen tremendous interest and use of the FirstNet fleet of portable network assets for public safety agencies’ emergency response needs, with more than 750 requests from public safety in 2020. That’s why, by collaborating with local network providers, we’ve expanded public safety’s fleet of portable cell sites to give Puerto Rico first responders dedicated, on-island portable cell sites. That means first responders across all 50 states, 5 territories and D.C. have unthrottled access to FirstNet connectivity with a dedicated fleet of more than 80 deployable network assets – available at no additional charge.

We’re also taking further action to increase network resiliency for today’s changing environment. From hurricanes and wildfires to the most recent unprecedented winter storms hammering the South, we are committed to providing public safety with a network that’s second to none in any emergency. Today, more than 98% of the population is covered by cell sites with permanent backup power solutions, but we aren’t stopping there. As we build new cell sites, we’re including fixed generators whenever possible and are committed to growing our fixed generator support on existing infrastructure. For places where a permanent backup power solution isn’t possible, that’s where FirstNet Response Operations and AT&T Network Disaster Recovery steps in bringing extended battery life and portable power generators as needed. These resiliency measures will ultimately help first responders to operate faster, safer and more effectively when lives are on the line.

How does this benefit local communities?

The FirstNet network expansion is one way AT&T is helping to bridge the rural-urban digital divide to help ensure all of public safety – and the communities they serve – have access to critical connectivity to help meet the urgent challenges of today and tomorrow. This new infrastructure will also help improve the overall coverage and network capacity experience for AT&T wireless customers in the area. Residents, visitors and businesses can take advantage of the AT&T commercial spectrum bands, as well as Band 14 when additional capacity is available.

Jason Porter, Senior Vice President, FirstNet Program at AT&T, explained, “2020 made it clearer than ever before how critical it is for first responders to have the tools and wireless infrastructure they need to communicate with each other wherever their mission takes them. Now tens of thousands of towns and cities have access to FirstNet, bringing America’s public safety community the only network built to their strict specifications and requirements. It’s because of FirstNet’s mission-centric design and unparalleled capabilities that more and more agencies are making the switch from best-effort commercial networks – and we’ll continue to deliver on the promises of FirstNet and proudly serve as public safety’s true network partner.”

Edward Parkinson, CEO, FirstNet Authority, said, “These are major milestones in the growth, adoption and deployment of public safety’s network. The FirstNet Authority is pleased that buildout continues to be ahead of schedule and that we are moving closer to fully realizing the vision of a nationwide network that serves all of public safety. This progress shows the strength of our partnership with public safety and how their involvement is critical to the success of the network.”

Deputy Chief John McMahon, Commanding Officer, Information Technology Bureau, Los Angeles Police Department, said, “AT&T’s commitment to the public safety community through FirstNet, is clearly evidenced by the quality and priority access of the cellular connectivity, and the tremendous customer service we are experiencing at the Los Angeles Police Department. The entire FirstNet team at AT&T is thoroughly engaged, working to deliver the tools and resources necessary to meet the unique needs of the LAPD. Most importantly, the FirstNet team’s demonstrated flexibility and willingness to adapt has become a critical aspect in the advancement of the LAPD’s mobility strategy and the management of our information technology infrastructure – critical for the thousands of officers that are dedicated to protecting and serving the people of Los Angeles.”

Danae Wilson, Manager, Nez Perce Tribe Department of Technology Services and Chair of the FirstNet Authority’s Tribal Working Group, said, “It’s encouraging to see new infrastructure is extending the reach of FirstNet for tribal communities. For the Nez Perce Tribe, we have worked collaboratively with the FirstNet Authority and AT&T to make sure FirstNet meets the needs of our tribal first responders. While the new site that launched in Kamiah, Idaho is an important step forward, we hope to have even more reservation coverage that will come as new sites are deployed.”

Chief Gerald R. Reardon, Department of Homeland Security SAFECOM Chair, Retired Fire Chief and Senior Advisor, Cambridge Public Safety, said, “Communications is integral to every public safety incident. And since FirstNet is designed specifically for first responders with the priority features we need, the City of Cambridge is utilizing FirstNet for our critical Fire, Police and EMS assets. The drive from FirstNet to consistently increase coverage has been impressive, especially as we work to combat COVID-19. With our mobile task force constantly moving locations for testing sites and vaccination locations, FirstNet not only fits the bill, but is key to our missions’ success.”

Kevin Killer, President, Oglala Sioux Tribe, said, “FirstNet is building out critical broadband infrastructure in areas that have long been underserved. I’m proud of the Oglala Sioux Tribe’s leadership as an early adopter of this network. Our tribal law enforcement department was the first tribal agency in the county to sign up for FirstNet. This new cell tower east of Vetal has improved connectivity for our first responders on FirstNet and the broader community.”