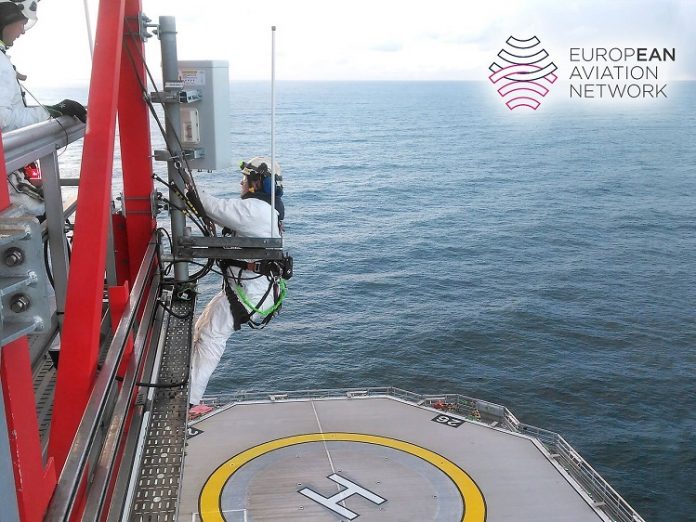 The cooperation entails the installation and maintenance of five EAN sites on production platforms in the North Sea. Two additional antenna sites are being placed in offshore wind farms within Germany’s and the Netherlands’ coastal waters (exclusive economic zones) and one more is already operational onshore in Norway.

The new sites are located strategically to further enhance EAN’s high-speed passenger connectivity on flights in Northern Europe, including high-density flight routes between the UK, the Netherlands, Denmark and Norway. They complement the 300 LTE-based ground network antenna sites already set up across Europe and will further strengthen EAN’s combined satellite and air-to-ground network performance.

The five sea-based antenna sites are co-located on the top of existing communication infrastructure on offshore production platforms and therefore benefit from Tampnet’s extensive fiber network in the area.

The necessary equipment elements were brought in via helicopter in often challenging weather conditions and installed according to stringent security requirements on the offshore production platforms. All engineering and installation activities were conducted in close cooperation with the platform owners and operators.

Rolf Nafziger, Senior Vice President of Deutsche Telekom Global Carrier, said: “With the installation of eight more antenna sites in and around the North Sea, we are proud to bring additional network capacity to an already exceptional connectivity service. The European Aviation Network gives European aviation a global advantage: Airlines get high speed and scalable connectivity with low operating costs and pan-European coverage. Passengers get a seamless service that is as good as a broadband connection on the ground.”

Philippe Carette, President of Inmarsat Aviation, said: “The European Aviation Network is well established as the continent’s fastest inflight broadband solution, available to millions of passengers on short and medium haul flights with British Airways, Iberia, Vueling and AEGEAN. For airlines, it has played an important role in enhancing the onboard experience, unlocking new revenue opportunities and instilling greater confidence in air travel. This latest enhancement coincides with the third anniversary of the service being offered to passengers by our airline customers, with passenger usage at record highs following the pandemic.”

Elie Hanna, CEO of Tampnet said: “Tampnet is very proud to partner with Deutsche Telekom and Inmarsat on such an innovative project. Our extensive offshore network was the perfect fit for the EAN project. Installing and maintaining an LTE network offshore is very challenging and we were honored to have the opportunity to extend our expertise and engage in such an innovative and significant project for Europe and the aviation industry. Going forward, Tampnet will support the project by delivering fiber backhaul and maintenance to the base stations providing additional coverage to the airspace above the North Sea. The fact that the network is fully supported by our subsea network ensures its scalability for future capacity needs.”

The network enhancement marks an exciting new development for EAN, which is the world’s first inflight broadband solution that combines dedicated satellite coverage with a complementary LTE-based ground network. Offering incomparable speeds, uninterrupted coverage and significantly lower latency than any other inflight Wi-Fi network in the continent, it allows passengers to seamlessly browse the internet, stream videos, check social media, enjoy real-time interactive applications such as gaming, and more.

To date, more than 55 million passengers have enjoyed access to the advanced, high-speed connectivity solution on over 440,000 flights across the continent. Its popularity reached new heights last year, with record usage as passengers returned to the skies. This aligns with Inmarsat’s latest Passenger Confidence Tracker, the largest global survey of its kind, which found that 41% of the 10,000 respondents believed inflight Wi-Fi had further increased in importance post pandemic.

Specifically designed to meet the needs of European aviation, EAN delivers the fastest speeds over one of the world’s most congested airspaces, plus the quickest installation times and easy scalability to meet growing future demand. It has now been activated on over 270 aircraft, including the entire British Airways short-haul fleet.

These numbers will continue to grow in the coming years, as final roll-out progresses with Iberia and Vueling – both members of the International Airlines Group (IAG) alongside British Airways – in addition to all of Greek carrier AEGEAN’s existing and new Airbus A320 and A321 aircraft.