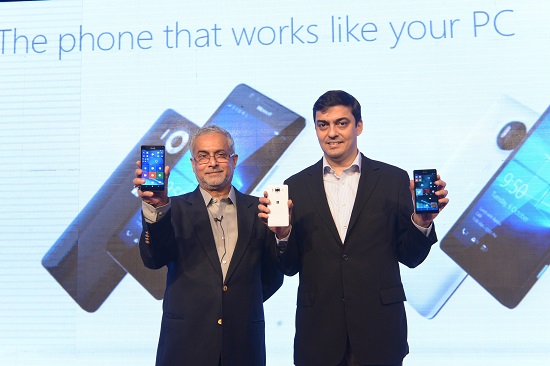 Microsoft has launched Lumia 950 and Lumia 950 XL, the first Lumia phones to come pre-loaded with Windows 10, in India.

Designed to offer consumers the best of Windows 10 combined with powerful and performance driven technology, the new flagship devices include innovative features like Cortana, Windows Hello beta for Lumia and Continuum for phones.

Starting today, the Lumia 950 and Lumia 950 XL will be available for pre-booking at Microsoft Priority Resellers across the country, Microsoft Store on Amazon.in and retail chains of Croma, Reliance and Sangeetha at a best buy price of INR43,699/- and INR 49,399/- respectively.

Consumers will get Microsoft Display Dock free as a limited period offer. Airtel consumers can double their data for free on purchasing their Lumia 950 and Lumia 950XL.

“With the launch of Windows 10, we have ushered in an era of more personal computingwhich is all about interacting more easily, more naturally and more securely in a mobile-first, cloud-first world. Now, with Windows 10 on Lumia we take innovation to the next level and build upon the unique experiences of Windows 10 for phone users,” said Bhaskar Pramanik, Chairman, Microsoft India. “Designed for Windows fans and mobile professionals who desire a premium phone that takes full advantage of Windows 10, the new flagship devices are powerful, performance-driven, unique and innovative” he added.

“We built Lumia 950 and Lumia 950 XL for people who want the most productive smartphones running the most productive operating system,” said Ajey Mehta, Country General Manager, Microsoft India. “The Lumia 950 and Lumia 950 XL deliver a familiar and consistent experience that extends across your Windows devices, including innovative features like Cortana, Windows Hello beta for Lumia and Continuum for phones, taking innovation to the next level.”