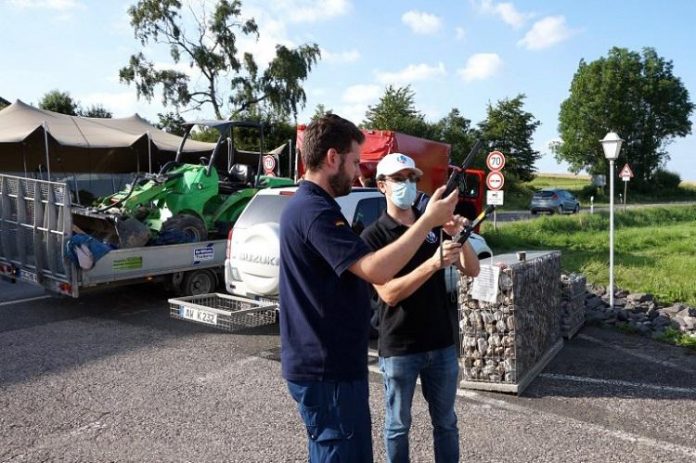 With thousands of people forced to leave their homes, roads completely destroyed and entire towns devastated, rescue operations began immediately but were hindered by phone and internet connections going down in some affected areas.

To ensure that communities could be contacted, and rescue needs ascertained and coordinated, TSF sent a specially designed vehicle to the most affected areas, offering telecom support to people on the ground, including relief organisations. The areas most in need were identified as the Ahrweiler’s district and the town of Euskirchen.

Deploying Inmarsat satellite lines and six IsatPhone 2 handheld satellite phones in Ahrweiler, meant that local firefighters and emergency responders involved in the rescue missions in Germany, including the Federal Agency for Technical Relief (THW), were able to regain communications.

“The IsatPhones provided to the firefighters and the Federal Agency for Technical Relief in Ahrweiler have been essential to support the coordination of their relief operations. In an area in which mobile networks have been down or unstable for several days, being able to count on reliable satellite lines has been of paramount importance to ensure an effective emergency response,” said, Sébastien Latouille, Head of Mission for TSF in Germany.

With terrestrial communications and electricity power also down in the city of Euskirchen, in Germany – TSF installed our Global Xpress broadband satellite connectivity in the offices of the local Red Cross to support emergency operations and continues to work with local authorities to adapt its response to telecommunications needs where the highest priorities lie.

“In Euskirchen, a district severely affected, where the floods submerged everything from roads to houses, the Red Cross requested our help to reconnect their office to the internet. This coordination centre hosts all the Red Cross email servers for the district, and the rapid installation of Global Xpress has been essential to help them continue the coordination of the distribution of food and other essential goods, as well as the work of ambulances to assist those injured,” explained Latouille.

Inmarsat has been an official partner to TSF for 21 years, providing the NGO with free airtime and financial aid to restore communications after disasters and coordinate relief efforts, as well as offering pro bono legal advice since 2019.