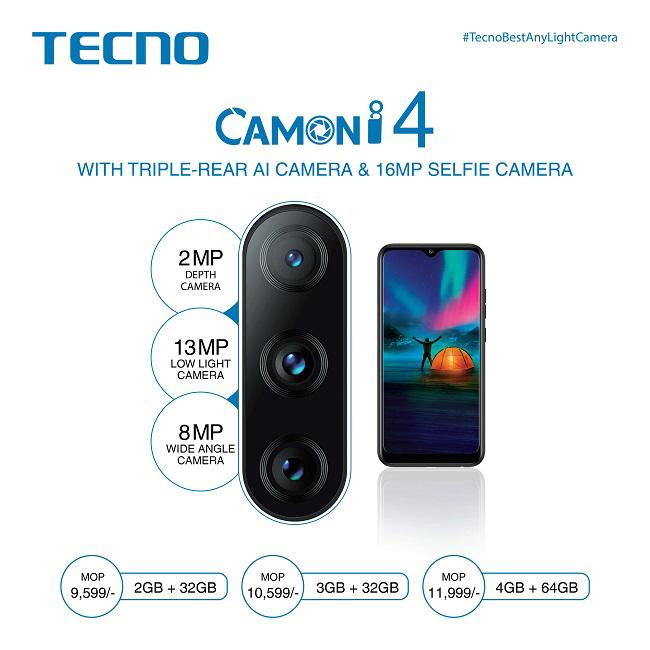 TECNO, the offline camera-centric smartphone brand in the mid-range segment has taken another step forward by launching its first Triple rear camera smartphone under its popular and massively successful CAMON portfolio in India.

TECNO CAMON i 4 is set to become a benchmark in under 12K segment owing to its ‘Best Any Light’ camera proposition.

The device comes with a powerful triple rear camera set-up that comprises of13MP primary rear camera with F1.8 apertures, an 8MP with 120o ultra-wide lens for capturing wide frames and a 2MP live focus lens that allows the camera to capture the subject and the background separately so as to get beautiful shots with the focus on the subject. That’s not all, CAMON i4 also sports a 16 MP AI selfie camera with 4-in-1 big pixel technology for real and clear selfie.

Arijeet Talapatra, CEO, TRANSSION India said, “Being a young consumer-centric smartphone brand in the most diverse and thriving market in the world, we have received unprecedented love and demand for CAMON series in India which is built on the Indian consumer insight that 89% buyers consider the camera as the top specification while buying a smartphone (source: CMR Mobile Industry Consumer Insights survey 2019). Over the past couple of years, Indian consumers have seen significant improvements in the smartphone camera technology and while the dual-rear camera trend has been well established in the mid-range segment, going forward in 2019 the key focus will be on multiple cameras and artificial intelligence (AI) capabilities that will become a must-have feature on every device in the 7-15K segment.

Speaking about the new smartphone he further added, “Going with the trend, there is innovation and something new in every facet of the CAMON i 4 starting with the triple camera lens to power ultra-wide shots to intelligent AI features that ensure the best picture composition. The 6.2inch HD+ dot notch screen with rocket charge feature delivers a superlative uninterrupted viewing experience. We are confident that with this device, we will amaze the consumer and consolidate our camera-centric smartphone brand position in the mid-segment. To strengthen the recently launched smartphones we will be driving in a 360-degree brand campaign #TECNOShineinAnyLight from mid of April which will encompass all touchpoints to reach our target audience.”