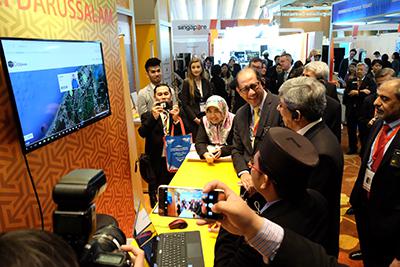 CommunicAsia2017, EnterpriseIT2017 and BroadcastAsia2017 have unveiled Asia’s largest gathering of companies and experts from the world’s technology and digital entertainment spheres showcasing a wide array of smart technologies that can be harnessed and leveraged on to build a ‘smarter’ future, transforming how people live, learn, work and play.

“With digital transformation turning into a critical component of Asia’s future, we have designed CommunicAsia2017, EnterpriseIT2017 and BroadcastAsia2017 to help companies who are eager to be future-ready,” said Mr. Victor Wong, Project Director of Communications Events at organiser UBM SES. “With two venues, we are able to play host to even more leaders and entrepreneurs from the entire innovation ecosystem, open up more opportunities to learn latest trends and network with peers, and provide a holistic and interactive experience for all attendees.”

Designed to be a showcase for everything ‘smart’ and ‘connected’, NXT on level five features an ecosystem of emergent solutions – such as AI, big data, cloud, cyber security, IoT, robotics and VR, that will drive industries and shape our digital tomorrow.

Highlights at NXT include Huawei’s cloud and IoT ecosystem, OTSAW’s O-R3 a security robot with land and air surveillance capabilities, and at The Virtual Reality Cinema, where visitors can experience movies in a whole new way, in 360. STMicroelectronics is showcasing their latest technologies and products for IoT and Smart Driving, enabling the transition of the city to the smart city, and workplaces and factories to smart workplaces and smart factories.

“The increasing pervasion of intelligence and connectivity across a broad range of applications and devices, along with the need for more efficient power and resource consumption, is at the heart of the Smart Living trend. Technological advancements are enabling the design of ‘smart things’ that are powerful, compact, energy-efficient, secure and affordable enough to provide new capabilities on a large scale and have unleashed the world’s vast creative potential,” said Marco Cassis, Executive Vice President and President, Asia Pacific Region, STMicroelectronics.

Recognising that start-ups have a growing impact on the region’s economy, NXT also comprises a zone aptly named Disrupt+, encompassing 40 start-ups showcasing technologies such as AI and chatbots, and Seedstars World, a global seed-stage tech start-up competition to be held on 25 May, where a winner will emerge to represent Singapore on the global stage in Switzerland.

The call to strengthen defences for critical infrastructure to protect important data is prevalent worldwide as threats to cybersecurity intensify. At CommunicAsia, visitors can meet experts from CDNetworks, CISCO, CommuniTake, CrytoGuard, Darktrace, Flash Networks and Ultimaco, and learn how organisations are turning to sophisticated cyber security systems to better cope and defend against security risks.

Asia’s largest congregation of global satellite operators is unveiled at SatComm2017, where more than 160 satellite communications companies are showcasing solutions enabling upcoming technologies such as 4K or even 8K in Asia, IoT to support smart city developments, and more.

“Overall, CommunicAsia and EnterpriseIT, designed to be a melting pot of innovations and a platform for thought leadership on the drivers of digital transformation, aims to foster meaningful collaboration between enterprises and governments, to create a smarter future for all,” Mr. Wong added.

As Asian broadcasters move to IP based systems, the event also sees the inauguration of the Broadcast IP Inter-Op Lab – which demonstrates how to capture, ingest, edit and distribute to OTT, all IP in real time. Visitors can get hands-on experience with state-of-the-art technologies on IP broadcasting for both audio and video, wireless production and immersive technology.

For production, filmmakers and producers at BroadcastAsia2017 will have access to some of the latest and best equipment and production software from the likes of ARRI, AVID, DELL EMC, RED, Bokkeh and Zeiss among others. Visitors can also expect a sneak peek of Panasonic’s upcoming small cinema camera and 360° camera system, along with their 4K studio and VariCam production cameras.

Commenting on VR for Broadcast, Fintan Mc Kiernan, CEO, Ideal Systems S.E.A. which recently collaborated with PCCW Global to deliver the world’s first live 360 degree and 3D multi-camera coverage of the 2017 Cathay Pacific/HSBC Hong Kong Sevens, said, “Live VR and 360° broadcasting for mega-events can be a real game changer for viewers and broadcasters alike. Sportscasting is only one of the many exciting possibilities that VR technology has to offer – this technology is definitely more than future hype, we have already started filming 360 VR productions in Asia. With AR/VR set to hit the $120 billion revenue mark by 20207, the media and entertainment industry can certainly look forward to breakthrough innovations in the coming years.”

The Producer Connect on 23 May is a platform for film and content producers in Asia to gather and brainstorm ideas, and address major challenges and opportunities in the media and technology space. The founders of BananaMana Films, an award-winning production company in Singapore which made it to international platforms such as Netflix, Cannes and Opus Pictures, will share their success story on ‘Jimami Tofu Featured Film in 4K’.

The sound designer of award-winning films such as Apprentice and Pop Aye, Lim Ting Li, will lead the line-up at the Post Production Hub. Other industry heavyweights and filmmakers will also provide first-hand industry expertise and insights regarding creative content acquisition, distribution and financing.