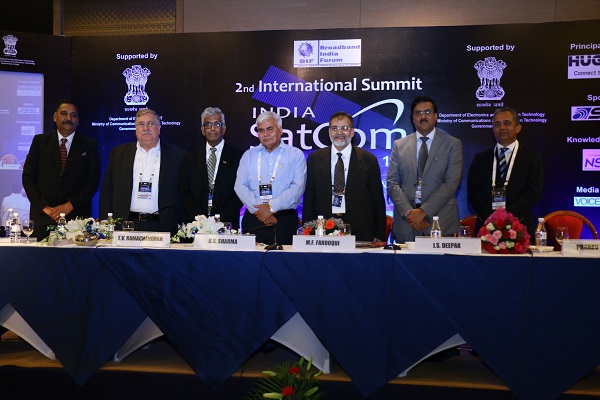 At a time when India is looking forward to deliver digital enablement and drive initiatives such as ‘Digital India’ – Satcom Technologies can play a key role towards realizing the full potential of national connectivity.

The Summit deliberated on the deployment of satellite communication (satcom) technologies – existing and next generation – to expedite penetration of affordable Broadband in India, especially in remote, rural regions, to complement other broadband technologies such as optical fibre, mobile, cable, etc.

Welcoming delegates to the Summit, T V Ramachandran, President – BIF, said, “India has much to gain once broadband penetration, currently at a low 10 per cent or so, picks up momentum from new technology innovations and investments. Satellite Communication technologies with its manifold innovations & applications could lead the country to the cusp of a digital revolution with associated boost to the efforts of other initiatives like Make in India, Skilling India and a spurt in FDI.”

The Summit deliberations also covered policy and regulatory issues to drive deployment of satcom technologies in support of national socio-economic programs such as Digital India, Make in India and Broadband for all. But such flagship programs need billions of dollars in annual funds – a huge challenge due to misconceptions surrounding satcom technologies.

Though one of the fastest means to ensure Internet and Broadband connectivity across India, satcom is erroneously termed as unaffordable, inaccessible and, therefore, unavailable for deployment in India’s highly price-sensitive market. This is as erroneous as the early 1990s’ perception that mobile phones were expensive technology toys not needed by common people. Today, India is one of the world’s fastest-growing mobile markets and most affordable too!

Accordingly, there is tremendous opportunity for foreign direct investments. As domestic funds are limited, the challenge lies in encouraging FDI inflows in satcom and broadband, since these can help fulfil the Government’s national objectives of Digital India, Make in India and Broadband for All.

Elaborating on the issues, M F Farooqui, Chairman – BIF, said “Broadband in India will have to be delivered not by one technology but through a mix of technologies. Satellite Communication is one of the more important means of achieving broadband to the rural and remote areas and for fulfilling the goals of Govt’s Digital India initiative. I am pleased to see that Broadband India Forum ( BIF ) is organising an event focussing on how Next gen Satcom Innovations & Applications can help accelerate the penetration of Broadband in India., “.

The Summit speakers stressed Broadband service over Satellite needed to be affordable (consumer price), accessible (all across India) and available 24×7 (both fixed location and mobile). Affordability is crucial because Broadband Satellite services in India are far more expensive than in the US (284 times on a normalized scale of package capacity, services price and pricing parity). Innovation, long-term commitment of public projects, liberalised policies that attract more local private players and foreign companies were important measures to curb costs and ensure affordability. These measures could also boost accessibility and availability.

As a technology neutral, not-for-profit think-tank for the promotion of the Broadband ecosystem in India, BIF has conservatively projected India’s required Broadband over satellite demand at between 100 and 200 Gbps over the next five to 10 years. Reforms in the satcom sector could facilitate innovations to cater to this projected demand. BIF estimates that FDI of $3-5 billion can be brought in to launch satellites, develop and manufacture satellite gateways (ground terminals) and also for the manufacture of end-user terminals (micro-VSATs, satellite handhelds, etc.). Such reforms could potentially lead to an increase in gross revenues of $30-100 billion over a decade and ensure a simultaneous spurt in GDP growth. Besides the contribution via growth in gross revenues, the multiplier effect will accrue due to rapid growth in Broadband penetration. Indeed, a World Bank report suggests a 10% increase in Broadband penetration leads to a 1.4% GDP growth.

Investment is also likely to come in for training and skilling local human resources to provide the relevant professional services. This much-needed FDI can trigger a spurt in local manufacturing of satcom components (including development and launch of India’s own satellites), creating a large pool of skilled human resources and thousands of new jobs.

Significantly, Satcom can act as an enabler for Bharat Net by fast deployment in a phased manner whereby all 250,000 Gram Panchayats across India can be connected within 18 months via Satcom connectivity until fibre is deployed. BIF has submitted a 10-year phase-by-phase Satcom plan to TRAI and BBNL for providing Broadband in all villages under the Bharat Net project. Satcom is also an enabler of many markets such as connectivity on aircrafts, in high seas, for offshore oil & gas sites, and in emergency services for connected cars – an important upcoming application to provide reliable communication link in cars using satellites for notifying first aid/ambulance/disaster recovery & relief services. Every 5% of lives saved during such incidents will result in annual savings of $1.3 billion to India’s economy.