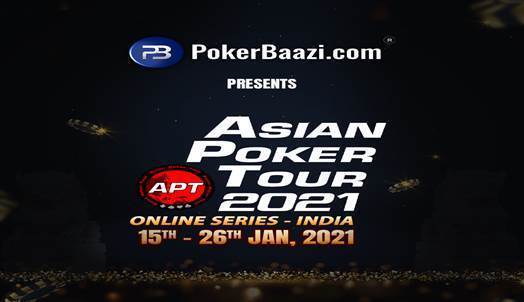 Kicking off on January 15, it will be open to Indian players only and see them battle it out over a course of twelve days, ending on January 26, 2021. The APT India Online Series 2021 will be conducted in collaboration with PokerBaazi.com on its platform, and will offer a guaranteed amount of INR 2 Crores for the main event while the rest of the rewards kitty would be divided among the 47 other tournaments scheduled during the series.

Speaking on the association, Navkiran Singh, Founder & CEO at Baazi Games, parent group of PokerBaazi.com said, “The Asian Poker Tour is one of the world’s most valuable poker properties and we’re incredibly honoured to bring the Tour back to Indian shores. After having held over 80 major events and numerous small tournaments across the Asia-Pacific Region, we are excited to join hands with the tour and add another landmark IP to India’s growing poker landscape. This truly is a great time to be a poker player in India.”

The APT series has seen international participation from Indian Poker stalwarts in the past. In a bid to expand its reach in the growing community in India, ATP has partnered with the country’s fastest-growing Poker platform – PokerBaazi.com – due to its mile-long list of users who visit the platform on a regular basis to enjoy the seamless and impartial online experience.

“What excites me the most about our partnership is the fact that PokerBaazi.com also operates a live poker room. So, on top of the action-packed online schedule we are putting together, players can expect us to bring back a live APT event to India before the end of 2021,” APT General Manager and Executive Tournament Director Lloyd Fontillas, elaborated on their plans for the Indian market.

The satellite tournaments, through which one can win multiple tickets to the main tournaments, will be held on PokerBaazi.com December 9th, 2020 onwards starting at just INR 22.