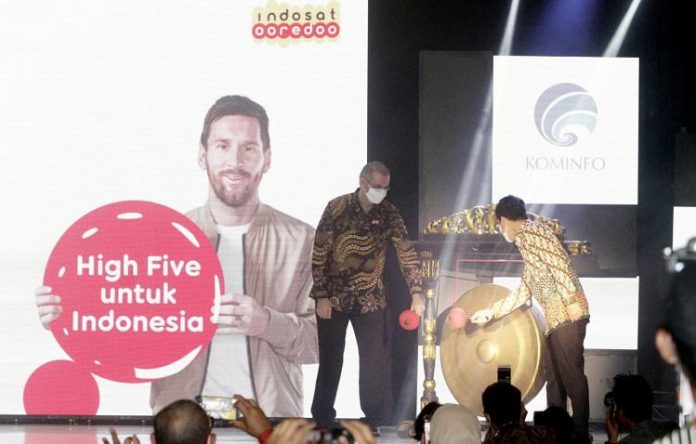 President Director and CEO Indosat Ooredoo, Ahmad Al-Neama, said: “I am deeply humbled and proud to launch Indosat Ooredoo’s first commercial 5G services in Solo and to showcase the transformative power of 5G technology to the youth and business communities in this wonderful city. We believe 5G technology will help accelerate the digital transformation of Indonesian society and stimulate innovation in businesses across all industries. Today’s launch marks the beginning of our journey in powering the 5G revolution in Indonesia, helping to move the nation towards a 5G-enabled future. Through our 5G services, we aim to fuel the spirit of #BangkitBersama5G in Solo and #HighFiveUntukIndonesia throughout Indonesia, aligned with Indosat Ooredoo’s mission to makes people’s lives better through the power of technology. On this occasion, we would also like to thank the Government of Indonesia for their continued trust and support for the company.”

Minister of Communication and Information Technology Republic of Indonesia, Johnny G. Plate, said: “Congratulation to Indosat Ooredoo, which has officially launched its first 5G commercial services in Solo. I am confident that 5G will boost productivity and national economic growth, given the superior technology. Even though 4G still serves as the backbone of our digital transformation, we hope that the initial commercialization of 5G can be further our national vision to be a regional digital powerhouse. Together, let’s ensure the presence of 5G service will bring benefits to the nation and have a significant impact on economic recovery.”

Huawei Indonesia CEO, Jacky Chen, said: “The 5G technology was discovered during the quest to address customer needs and pursue technological innovation. We believe those ‘two wheels’ will keep moving all forward to unlimited possibilities of the future, from seamless connectivity, Smart City development, digital transformation to accelerated growth of the digital economy. Technology will continue to create greater value and drive innovation. We are glad to become part of the historic milestone, together with our trusted partner Indosat Ooredoo and the people of Solo, to build a more intelligent and connected Indonesia.”

Indosat Ooredoo’s partnership with Surakarta Municipality aims to foster a collaborative response to accelerating the city’s economic recovery by empowering MSMEs and allowing its youth to reach their full potential.

5G services from Indosat Ooredoo will provide higher internet speed for consumer and business customers and open-up opportunities for new innovations that will enrich the quality of life for the people of Solo and stimulate the economy.

To empower Solo’s MSMEs, Indosat Ooredoo has started selling Rasa Solo Hampers on the myIM3 app, and will train 10,000 of the city’s micro-businesses on how to go digital. In addition, Indosat Ooredoo is providing UCan; a micro-lending offer for MSMEs to help fund the growth of their businesses.

Following the initial 5G launch in Solo, Indosat Ooredoo plans to extend the commercial roll-out of 5G services to other major cities in Indonesia, including Jakarta, Surabaya, and Makassar, where there is high consumer demand for data services.