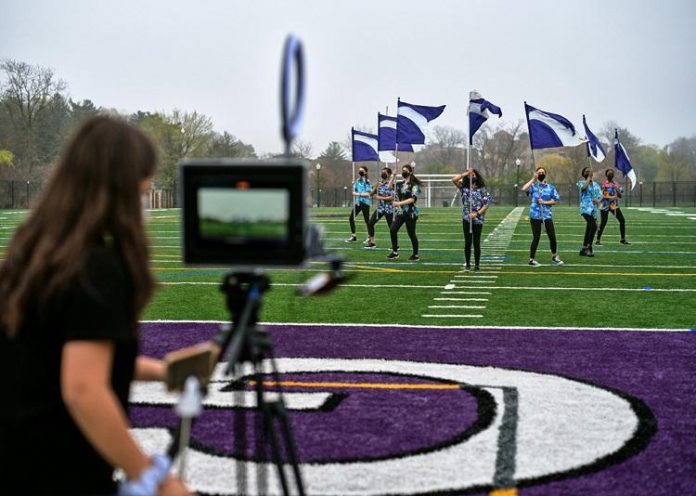 Over the last year, as bedrooms and kitchens became classrooms, teachers and students around the world adjusted their lives to remote learning. Educators met that challenge head-on, using Apple technology to help their students learn, connect, and thrive in new ways.

From launching an online high school musical, to exploring history with iMovie and GarageBand, to producing a virtual graduation ceremony, educators in the US and beyond created innovative ways of teaching that will be carried forward for future generations of learners.

On April 30, 2021, New Rochelle High School in New Rochelle, New York, debuted its production of the musical “Is There Life After High School?” But instead of playing to a packed house in the school auditorium, the performance streamed online.

After 2020’s musical was cancelled because of COVID-19, drama and film teacher Anthony Stirpe decided he was going to make sure the school’s students were able to put on a show this year. He reimagined every aspect of the production, using iPhone, iPad, and Mac to shoot and edit the vignettes and songs remotely, and, when in person, socially distanced.

“The musical is based around the idea of adults looking back to high school and remembering the kid inside all of us,” says Stirpe. “A lot of the material is about loss or regret, or overcoming something, and I wanted the students to see that, yes, this is a difficult moment, but we all deal with difficult moments in our own special way. And one day, you’ll tell this story like you’re telling these people’s stories.”

Preparation for the musical got underway in late 2020, when students submitted auditions shot on Apple‘s iPhone and iPad to Stirpe. Rehearsals started in the new year, and cast members uploaded their video monologues so that Stirpe could give feedback. After all of the scenes were shot on iPad and iPhone, he edited the musical with iMovie and Final Cut Pro on a MacBook Pro.

“Without this technology, there is no way we would have been able to do this,” says cast member Noah Massey, 17, who graduated from New Rochelle this year. “The time I’ve spent doing the musical this year helped me open myself up in a way that I’ve never done before, and it’s given me a skill set I can take forward into my future.”

New Rochelle High School teacher Anthony Stirpe spent months reimagining how to stage the musical “Is There Life After High School?” in a new way.

“Mr. Stirpe is obviously amazing for creating this for us,” says castmate and recent graduate Olivia Dower, 17. “He has just done an incredible job at banding us all together, figuring out a way to do this during COVID-19 and creating those moments where we can have the fun that we’ve missed from the last year.”

Olivia’s parents credit the musical with giving their daughter an outlet during a tumultuous time.

“I feel like I’ve been running in place a lot of this year, trying to maintain my children’s mental health,” says Laura, Olivia’s mother. “There was so much trauma — we were trying to make sure our kids were supported and involved. Mr. Stirpe figured out how to make sure they felt connected.”

After the performance debuted, Stirpe received an unexpected email from Jeffrey Kindley, who wrote the Broadway musical 40 years ago and watched the New Rochelle production online.

“You created something spectacular in our year of lockdown limitations: You found ways to use the intimacy of iPad and Zoom to focus on private moments and make them instantly relatable,” Kindley wrote. “It’s odd to be moved by your own words when you wrote them four decades ago, but it happens when talented people bring them to life again.”

Olivia Dower, a student at New Rochelle High School, credits the musical with giving her and her classmates a sense of connection in a challenging year.

In Glasgow, Scotland, Scott Anderson reimagined how to teach history remotely while his students at Castlemilk High School were under one of the longest sets of lockdown in the world.

He started by teaching himself iMovie and GarageBand, and then used them to create self-narrated virtual lessons featuring archival photos, sound effects, and video clips that his students could access digitally at any time.

“I think during the lockdown period, remote teaching became slightly repetitive, so I think it’s good to vary the teaching style,” says Anderson. “iPad and its built-in creativity apps made it so easy for me to do that quickly and virtually. And to be honest, I would certainly say the pupils are outshining me in the technology department now.”

That’s because Anderson’s virtual lessons inspired a new set of assignments: Using GarageBand, his students created their own podcasts about key elements of history.

For example, in a podcast about women’s fight for the right to vote in the United Kingdom, final-year student Ben Mawson, 17, recorded himself walking around at home wearing hard-sole shoes to evoke the idea of women marching, and added the sound of glass breaking when he talked about the tactics they sometimes employed.

“Watching these videos and making these recordings was much better and much more exciting than just going over our notes,” says final-year student Carris Kenna, 17. “And because everyone had their own iPad, you were always connected to your teachers. You could contact them anytime if you needed help, and it made me feel like we were all a big family.”

Carris Kenna, a final-year student at Castlemilk High School, thinks her teacher’s use of technology during Scotland’s lockdowns helped bring her history class to life.

Castlemilk High School is located in one of Glasgow’s most economically deprived areas and was part of the city’s push in 2019 to get an iPad into the hands of every student. Five years ago, 20 percent of Castlemilk graduates went on to higher education. This year, in the midst of a pandemic, that figure has jumped to 50 percent.

“The students each having an iPad isn’t the only reason that’s happened, but without iPad, none of it could have happened,” says Head Teacher Lynn Gibson. “During the lockdowns, I was worried — how do we keep them safe and make sure they’re okay? And iPad was the tool that enabled us to keep that contact going and support them as they planned for the future.”

During the lockdowns, I was worried — how do we keep them safe and make sure they’re okay? And iPad was the tool that enabled us to keep that contact going and support them as they planned for the future.

Anderson is planning to apply these new methods of learning to his classes going forward and thinks they will help bring history to life for students once they’re back at their desks.

As for graduates Carris and Ben, both are attending university in the fall, and both are planning to study history.

“My goal is to become a history teacher,” says Ben. “And after seeing what Mr. Anderson has done, it’s definitely a system I would use in my own classes when I get to that point. It really helped me, and it gave me some ideas about how I could help future generations.”

Castlemilk High School history teacher Scott Anderson taught himself GarageBand and iMovie so that he could find ways to keep his students engaged and connected while they were learning remotely.

In the midst of school closings and lockdowns across the country and around the world, countless high school and college seniors missed out on graduation ceremonies in 2020 and 2021. At Delaware State University, a Historically Black College and University and Apple Distinguished School in Dover, Delaware, President Tony Allen and Professor Francine Edwards were determined not to let that happen.

Dr. Edwards, a former television producer and dean of Delaware State’s College of Humanities, Education, and Social Sciences, began working on a completely virtual ceremony — one that could stream online so graduates and their families could experience the event from anywhere. She put out the call for video messages of support and congratulations from the entire Delaware State community and beyond, and included a tutorial video on how to shoot on iPhone or iPad.

Dr. Francine Edwards, a professor at Delaware State University, drew on her background in television production to create a virtual graduation ceremony.

Dr. Francine Edwards edited all of Delaware State University’s 2020 graduation and elements of the 2021 ceremony on iPad and MacBook Pro.

“We got so many messages in — we even heard from parents who used their student’s iPad to record their video,” says Dr. Edwards. “It came together so fluently because almost everything was shot with Apple devices, and I edited on my MacBook Pro and iPad and created graphics and transitions using Keynote. Even our chaplain recorded the benediction on her iPhone.”

The result was a masterfully produced, fast-paced, two-and-a-half-hour virtual graduation ceremony that included messages from dozens of celebrities and politicians, including Delaware’s governor, both senators, and former Vice President Joe Biden. And it meant the world to the class of 2020.

“The final product was amazing,” says Austin Williams, 23, who graduated last year and helped with the ceremony’s production. “I was sitting at home watching with my mom and my brother and thinking to myself, ‘This feels like an actual graduation.’ It made up for it — it made up for a lot.”

Austin Williams’s mother, Stephanie, sees her son’s work on Delaware State University’s graduation as a lifeline during the pandemic and a learning tool for his future career.

Dr. Allen and Dr. Edwards drew on last year’s model to create a hybrid set of ceremonies for 2021 graduates that included virtual elements throughout — something they will continue to use for commencement ceremonies in the future. During the year, Dr. Allen also held more than 50 virtual university forums to help students connect and talk about the pandemic as well as the nationwide protests on race and equity. The school was well prepared for this new, virtual world: Delaware State provides an iPad or Mac, keyboard, and Apple Pencil to every student.

“At the beginning of the pandemic, we had to take 1,700 in-person classes digital in five days,” says Dr. Allen. “Had it not been for Apple devices, there is no way that we would have been able to survive and maintain academic continuity for our kids. It helped sustain them this year — our retention rate actually went up 5 percent — and it put real-world tools in the hands of our students, so we know that they are prepared for what they’re going to see in the workplace and beyond.”

Since Williams graduated, he has been putting those lessons into practice as he works toward creating his own marketing firm.
“I love to tell stories, and being part of this project with Dr. Edwards helped to tell Delaware State’s story,” he says. “It also helped me develop the skills I need to make my own business successful — and that’s the dream: to work for myself and help others tell their story.”