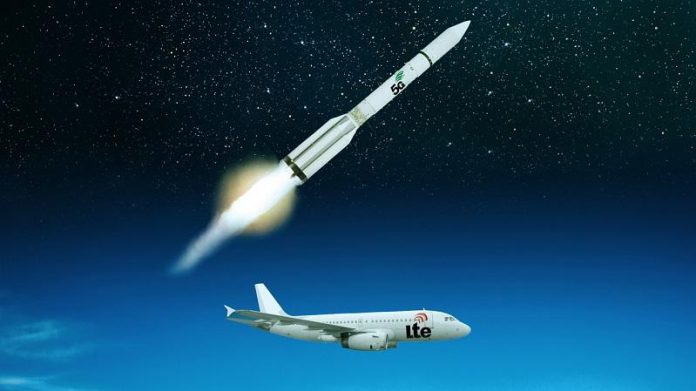 I was thinking recently about Elon Musk and his vision for the SpaceX Starship, which will return astronauts to the moon and ultimately carry explorers to Mars and back. SpaceX has tested the Starship’s ability to lift off, perform maneuvers and touch down safely, sticking the landing back on Earth. This was an unmanned mission with no astronauts on board to pilot the spacecraft — an impressive demonstration of zero-touch operations.

Even with astronauts onboard, the Starship will fly itself, relying on sophisticated, telemetry-driven avionics to control in-flight operations from liftoff to touchdown. Of course, astronauts can instruct the spacecraft to do X, Y or Z, but once directed by the pilot, it performs the necessary maneuvers autonomously.

In fact, controlling the flight of such an advanced spacecraft in real time is so complicated that relying on human pilots could cause the Starship to veer out of control and crash. Zero-touch is a must-have capability and not merely nice-to-have.

Contrast this with Boeing’s 777 jetliner, which also incorporates state-of-the-art avionics. While it’s said these jets are able to “fly themselves,” a pilot is capable of piloting the aircraft in a wide range of conditions, and humans are so essential to in-flight operations that there are always two pilots on board. Avionics are employed to augment the ability of pilots but are not intended to serve as a substitute for the humans in the cockpit.

Operating today’s 4G/LTE networks is analogous to flying a Boeing 777. Human operators are integral to network operations workflows. Network monitoring provides valuable telemetry data that informs decision making, but the people in your Network Operations Center (NOC) are in charge.

In zero-touch 5G networks, your NOC team will become more like the SpaceX Starship astronauts, directing the network to do X, Y or Z, which will then proceed autonomously, without the need for humans to perform the necessary functions. As in the Starship, real-time telemetry data will be continuously collected and analyzed to inform 5G “in-flight” operations for carrying out service orchestration and network automation functions. In its own way, the vision for zero-touch 5G is as bold and ambitious as that of the Starship.

How can you realize this objective in your own networks? The answer lies in the design principles and key technologies that underpin this vision, which the 3GPP has created as part of the 5G System.

Standards enable suppliers to build applications that are interoperable with other products adhering to those same standards, fostering the growth of a supplier ecosystem that helps fuel innovation. Suppliers benefit by investing in product development with confidence that there will be a market, while customers benefit from the competitive environment that spurs further innovation with the freedom to choose best-of-breed products that strike the right cost-benefit balance for the customer.

OSS/BSS solutions for telco networks have been plagued by a lack of standards, particularly when dealing with the different types of data that are critical to network operations, service management and billing. This has resulted in a proliferation of middleware and mediation products that have been utilized to integrate components from many suppliers into the highly customized OSS/BSS systems that operators depend on.

This is changing with the 3GPP’s investment to standardize network and management data analytics in 5G network operations, which I described in a blog post. The transition to 5G will force mobile operators and suppliers to engage in the process of OSS/BSS transformation, which will include the adoption of new standards in the management plane. This transformed network operational environment is the foundation on which zero-touch 5G network operations will be delivered.

Network automation relies on telemetry to continuously monitor the state of the network, and telemetry data is generated by instrumentation. 4G/LTE mobile operators have deployed extensive overlays of additional hardware and software components that are used to instrument the network for telemetry data. The scope and complexity of these overlays have grown concurrent with the increasing scale of 4G/LTE networks and explosive growth in the volume of voice, messaging and data traffic.

In 5G, the goal is to design the instrumentation into the network itself, minimizing the need for separate telemetry overlays, except perhaps for the occasional forensic analysis requiring in-depth monitoring using specialized equipment. The 5G RAN and Core will be built using virtualized network functions in which software instrumentation can be easily embedded, either designed into the underlying code or installed with each software component as normal operating procedure.

Best practice for cloud-native environments is to instrument software components so that each generates the metrics, logs or traces related to current operational state. Hyperscale cloud providers have successfully adopted this model for managing the applications, services and networks deployed in massive data centers. 5G operators will take this same approach, while also adopting standards for telemetry data.

4G/LTE operators have deployed big data analytics solutions that collect telemetry from the monitoring overlay, store the data in a central data lake and then perform analytics. However, this approach often results in a significant lag in detecting network state changes, which not only hinders any attempt to utilize network automation but can also leave network operators flying blind.

AI and machine learning will be heavily utilized in 5G networks for analyzing data to detect patterns and identify trends predicting the future state of the network. Predictive analytics will be critical for enabling operators to act proactively, with machine intelligence also driving the network automation required. 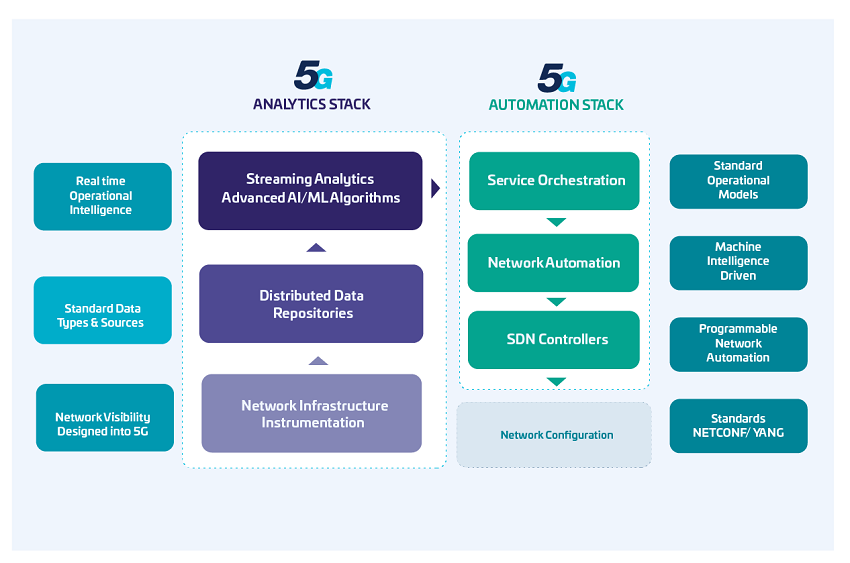 Getting to Zero-Touch 5G Networks

The major difference between 4G/LTE and 5G networks is the primary consumer of network data analytics. In 4G/LTE, monitoring and analytics feeds dashboards in the NOC, and operators utilize this information to make decisions. In 5G, your network analytics data will feed directly into service orchestration and network automation functions. Human operators in your NOC will still have dashboards that provide visibility into network state, but for the purposes of maintaining situational awareness and backstopping network automation in the event of a problem beyond the ability of 5G machine intelligence.

Zero-touch networks are the vision for 5G, and you’re likely going to reach this goal incrementally. When automation is initially employed, you can ensure there are hooks to insert human decision-making into workflows until you gain full trust in your analytics-driven machine intelligence. Once your system is proven capable of performing faster and more reliably than the people working in your NOC, these manual interventions can be disabled, allowing you to benefit from the power of autonomous, self-driving 5G networks.