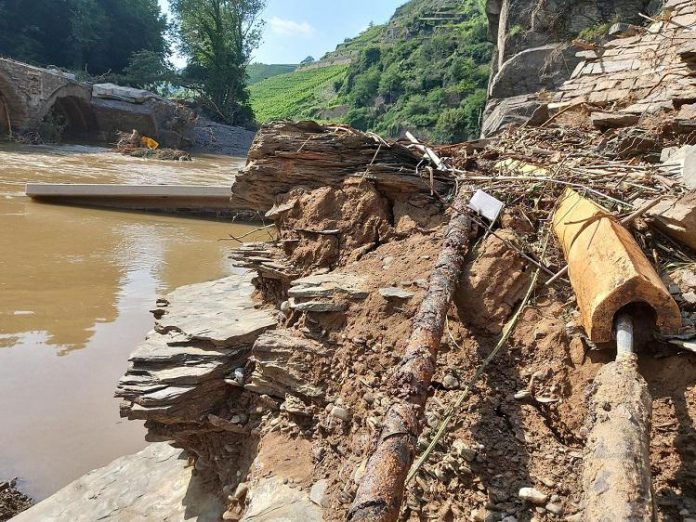 The full extent of the disaster is gradually becoming apparent. Deutsche Telekom technicians also report unimaginable damage that even the most experienced among them have never experienced before.

Deutsche Telekom employees are doing everything they can to alleviate some of the hardship and improve the situation in the disaster areas. To this end, the teams are working day and night, and in the process they are making progress.

Piece by piece, literally meter by meter. Not only with technology, but also with replacement cell phones, power banks and starter kits. In mobile and fixed networks, some things have already been restored. Nevertheless, it remains a Herculean task in view of the destruction. Our sympathies go out to all the relatives of the victims.

Higher capacities will follow successively. A total of around 130 sites in the crisis regions of North Rhine-Westphalia and Rhineland-Palatinate were down in Telekom’s mobile communications network as a result of the storms.

The technical teams are working flat out to connect the areas that have not yet been reconnected. The aim is to get the existing infrastructure back online at the existing sites and facilities if possible, as this is often the quickest option.

Where this is not possible due to the heavy destruction, mobile stations and radio relay links are also being used and kept in reserve for this purpose. The main problems currently remain the lack of power supply and the accessibility of the sites.

Gerolstein central exchange back on the network

In the fixed network, the situation cannot yet be precisely quantified. The masses of water and debris have caused major damage to fiber-optic and copper cables in large parts of North Rhine-Westphalia and Rhineland-Palatinate. The exchanges are currently being made functional again.

For example, the central exchange in Gerolstein was brought back online at the weekend. Around 10,000 lines and several mobile communications sites are connected to this exchange. Many “gray” boxes on the streets and sidewalks also need to be replaced or repaired.

There are places where a completely new infrastructure has to be built. In some cases, entire roads and bridges with lines have been torn away. In some regions, it will take several weeks to restore the infrastructure. Here, too, there are emergency measures. In the next few days, for example, an above-ground fiber-optic cable will provide fast, provisional coverage in the Ahr Valley.

The storms in Bavaria and Saxony are not currently affecting Telekom’s network.

Telekom has taken further measures to help the people affected as quickly and easily as possible. The service teams are currently sending cell phones, SIM cards and powerbanks to the crisis areas.

They are also distributing “quick-start packages” so that people without a fixed-network connection can quickly get back online. In addition, affected customers are receiving data packages via SMS or e-mail. Contract customers can currently activate unlimited data volume for 31 days free of charge. On the hotline, those affected from crisis regions are prioritized and dealt with in an accommodating manner without having to wait.

Help is also available to Telekom employees affected by the crisis. Colleagues who are unable to carry out their work due to the floods have been given paid leave from work. They can take up to five days of special paid leave for the necessary cleanup work without any red tape.