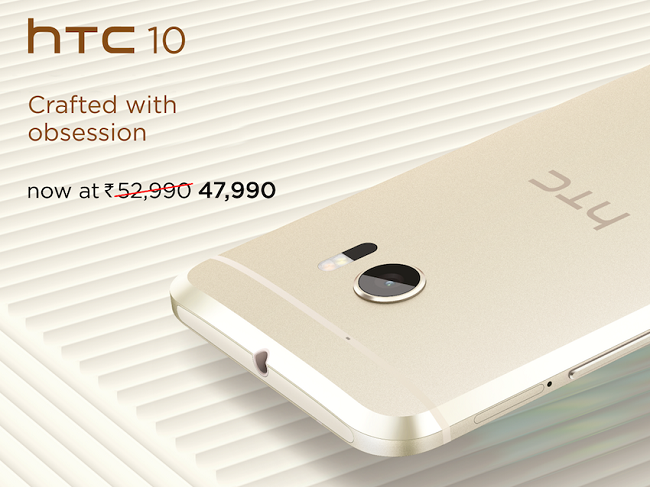 HTC India has announced that its flagship device, HTC 10 will now be available in India at discounted rate.

As a part of the company’s celebrations this festival season customers will now get an opportunity to experience the Power of 10: HTC’s engineering excellence, obsessive craftsmanship, unparalleled performance and imaging leadership at a reduced price of INR 47,990 effective immediately.

The flagship was launched in April 2016 at Rs. 52,990/-. HTC 10 delivers a power packed performance combining the world’s first OIS front and back camera with world’s first 24-bit Hi-Res audio. This is supported by 4K video recording and BoomSound Hi-Fi edition with a separate tweeter and woofer setup.

The HTC 10 boasts of Optical Image Stabilisation in both front and back cameras and a DxOMark score of 88, which is one of the highest camera quality scores of any smartphone till date. All this is packed into a bold new metal unibody design crafted to deliver unparalleled performance.

The HTC 10 delivers optimum performance supported by best–in–class software and hardware, with apps that launch twice as fast and that perform to the highest standard and a next generation quad HD display that is 30% more colourful, creating a true cinematic feel, and that is 50% more responsive to touch than its predecessor, even the smallest and fastest of finger movements track perfectly.