Colt Technology Services has announced that the Colt Encryption Services has been deployed for the first time at the Berlin International Film Festival 2019.

This new Colt solution is at the forefront of encryption technology and ensures secure connectivity encrypting all traffic at the festival regardless of the type or source across the extensive coverage footprint that the Colt IQ Network provides. These include Europe, Asia and between continents including North America.

During the Berlinale, the importance of the performance and a secure high bandwidth network are crucial for the success of the event. Ove Sander, Berlinale’s Technical Head of Digital Cinema and his team have to manage and transmit film content, directly through the Berlinale’s glass fibre network. Colt enables the Berlinale to respond with agility, load peaks and adjust bandwidth to their requirements in real-time.

Colt’s hardware-based Ethernet encryption solution protects bandwidth between 1 Gbps and 10 Gbps, depending on the line, and additional latencies which are limited to less than a millisecond. Because the data is encrypted using a specially programmed chip, the Berlinale will be able to combine speed and security in the transmission of film data.

“Security is very important for our festival,” says festival director Dieter Kosslick. “It is correct that digital transformation has brought a lot of benefits in the process. But in the same way, it’s brought great challenges here. We are pleased to benefit from the evolution of the technology in the security area from our long-standing Digital Cinema Partner. It enables us to reinforce the confidence that we have earned as a festival from studios and filmmakers across the world.”

According to Sueleyman Karaman, Managing Director of Colt in Germany, “The Berlinale increased the performance of its network through on-demand services and software-defined networking last year. We are proud and pleased to see that the organisers rely on Colt for the security of the network. Encrypting data during the transmission is a key part of an integrated security strategy. Colt will offer a Managed Service as a standard product from the second quarter of 2019.”

Since 2009, Colt has been a Digital Cinema Partner of the Berlinale, providing network services with high bandwidths of up to 10 Gbit/s and internet access to enable high-quality data transmission. The Colt-owned glass fibre network enables the direct distribution of film data from the data centre to all 18 festival venues with a total of 54 halls. For the approximately 2,500 screenings at the festival and the European Film Market, a data volume of about one petabyte is transmitted over the network.

Berlin has played an important role in 2018 with the expansion of the Colt IQ Network in the the German capital. This expansion extended Colt’s global footprint, which connected more than 500 on net buildings and has seen more than 100km of additional fibre being put into the ground in Berlin.

In addition, a network ring connects Warsaw, Krakow, Brno, Prague and Dresden from Berlin witha second ring connecting Bratislava, Budapest, Bucharest, Sofia, Belgrade and Zagreb from Klagenfurt in Austria. In addition to the cities, ten new data centres in Eastern Europe will be connected to the Colt IQ Network. In total, the network will be expanded by more than 7,000 kilometres of fibre optic lines. 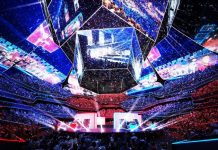 How Telcos are the perfect partner for e-sports