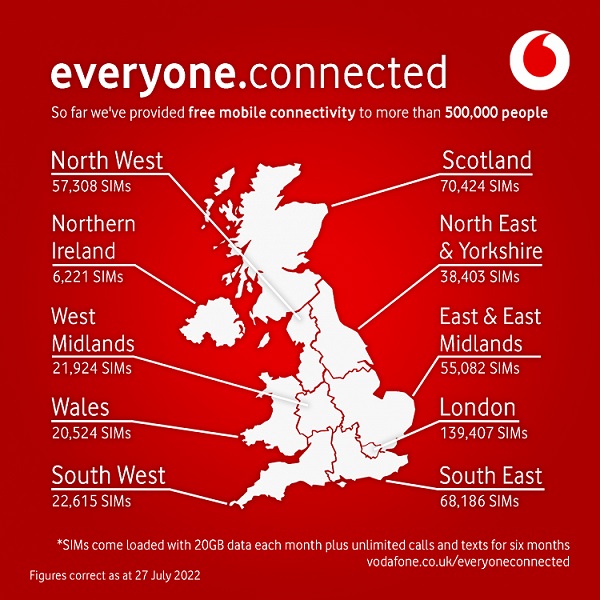 As part of its long-term commitment to close the digital divide, Vodafone has reached the half million mark in its campaign, having donated 500,000 free connections to people across the UK.

As the need for free connectivity grows as a result of the cost-of-living crisis, Vodafone wants to raise awareness of the issue and its everyone.connected programme. The programme provides people with a free SIM with 20GB of data a month, for six months – plus unlimited calls and texts – through a network of charity partners.

Despite over a million households living without access to the internet, only 1-in-5** people are aware of the issue. As a champion of the cause, Vodafone commissioned award-winning performance poet and author, Sophia Thakur, to pen an emotive poem to highlight the impact digital exclusion can have. Her performance, entitled ‘The Divide’, shows how ‘simple’ everyday actions such as booking a GP appointment, applying for a job or paying a bill are almost impossible when you don’t have what most of us take for granted. She paints a picture of a group excluded from society, looking on from the sidelines, not being able to take part – just because they aren’t connected.

Sophia said: “With each passing day we see the world becoming more dependent on connectivity, but we often forget about those who are living without it. Reliable connections can help more people to access even the most basic things that many others take for granted. I hope that, through the work Vodafone is doing and by raising awareness of the issue of digital exclusion, we can fill the gap and close the divide.”

Ahmed Essam, Vodafone’s UK CEO, said: “We hope our partnership with Sophia will drive more understanding of the issue we are so passionate about. Her beautiful words and performance are designed to help people understand what it might feel like to be disconnected so they can help anyone they know who might be in that situation. We’re proud our everyone.connected programme has reached the half million milestone, but we know there are many more people out there who need help. As the poem says, connection shouldn’t be a luxury.

We couldn’t do this without our charity partners and would like to thank them for all they are doing to get connectivity into the hands of those who need it most.”

The 500,000 milestone marks the halfway point in Vodafone’s commitment to connect one million people experiencing digital exclusion by the end of 2022, as part of its wider everyone.connected programme. The figure has been reached through Vodafone’s partnerships with charities such as The Trussell Trust, Barnardo’s and Good Things Foundation, as well as the huge number of charities that are part of its charities.connected programme.

As well as its everyone.connected campaign, Vodafone is also committed to providing affordable connectivity to those struggling most with the cost of living. Vodafone’s £10 a month ‘VOXI’ For Now low-cost mobile tariff is available to anyone claiming Job Seekers Allowance, Universal Credit or Employment Support Allowance. It includes unlimited 5G data, as well as unlimited calls and texts.