Home Internet Why is banning VPNs a bad idea? 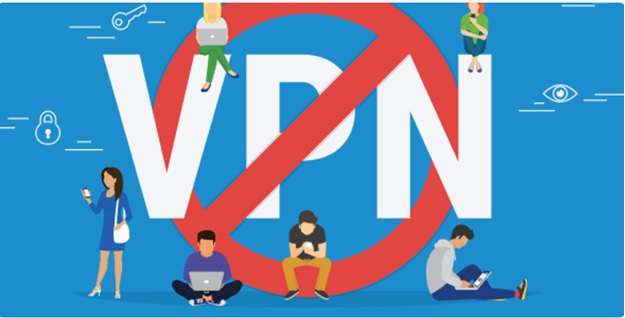 If you’re unaware of the countless advantages a VPN service provides, it certainly would be unearthly. From allowing audiences across the globe to stream Hayu outside Australia to streaming Voot in Australia, a VPN service is essential in trespassing internet censorship in various countries, enabling spectators to enjoy their favorite content at the leisure of their homes.

However, several nations’ governments suggested outlawing the practice of employing a VPN by imposing a ban! Ignorant of the fact, such a practice can be counterproductive and increase the risk to users’ web security.

From comprehending the benefits of a VPN to the constraints of banning it, the justifications of banning it offered by governments to find a way across this ban, everything is present in this article so READ ON!

You can browse the Web more discreetly by employing a VPN. Your privacy is more safeguarded whilst surfing the web as an outcome. VPNs can indeed assist users in circumventing limitations imposed by other nations’ governments. Listed below are some of the primary advantages of utilizing a VPN.

VPN is crucial for safeguarding your connection. Each time we use the Web, people frequently receive irrelevant adverts with bogus hyperlinks. People typically click on the hyperlinks that redirect them to malicious sites.

The risk of data theft is increased. On such links, people occasionally divulge pertinent data and get in hot water. But, a VPN can benefit you by eliminating these challenges and encrypting your network. Your device will send and receive data in an incognito manner.

Cybercriminals are constantly seeking ways to acquire your private details. They attempt to gain access to your credit card information or bank account details. A VPN offers protection from such perils via 256-bit encryption. It protects the data from intrusion by third parties by encrypting it.

It’s accurate that certain individuals utilize a VPN to circumvent geo-restriction. By accessing a VPN server in the USA, for instance, you can access Netflix US from a different nation. It deceives content providers into treating the connection as local by employing an American IP.

About this, a VPN is employed to circumvent internet censorship in nations that impede online freedom. For instance, you need a VPN to use Facebook, YouTube, and Gmail in China.

What makes the government forbid VPN use?

As stated earlier many ruling bodies feel the need to ban VPN services in their countries. They reckon a VPN can facilitate cybercriminals in sustaining their online anonymity.

The premise that VPNs are commonly accessible and frequently misused by crooks is yet another justification for the prohibition. Consequently, it hinders the copes investigation by concealing the suspects’ identities. To preserve the interests of the nation, it therefore suggested outlawing this service.

Unauthorized VPN service vendors are no longer permitted in China. A $145 penalty is charged against every user who is detected using an unauthorized VPN. With the Parliamentary Commission advocating for a nationwide ban across all VPNs, India is willing to follow suit.

Although authorities’ goals are attained by prohibiting VPNs, it is more detrimental to common people than beneficial. Wondering why?

A VPN blockade provides the government greater control but also exposes the broader people to risk. Web users forfeit one of their most potent defenses against hackers. Users who employ wifi Networks to access unprotected sites are more vulnerable.

The limitation imposed on VPN providers is crystal clear. It intends to exert absolute control over user digital activity. In other words, your ISP or law enforcement institutions are scrutinizing every minute you spend online. The Web becomes a stifling arena for those who treasure their privacy.

Without a VPN, anyone who has the requisite technical means can collect data regarding your browsing habits to further their interests. Nobody aspires to become a free space for others.

Any type of VPN restriction will be detrimental to the corporate world. VPNs are employed by businesses to minimize the leak of confidential content and to maintain the privacy of official communications. Businesses will suffer immensely if all VPNs were to be banned.

China’s decision to ban the preponderance of VPNs is already indicative of how catastrophic such a decision can be. It signifies that accessibility to well-known business apps and websites is denied to voyagers on workers who are overseas.

How to overcome a VPN block?

Connect to a private server.

Obfuscation tech, often alluded to as a “stealth VPN,” permits you to disguise the fact that you’re using a VPN. Your VPN traffic can receive an additional encryption layer or the content may be altered so that the algorithm cannot discern it. For this reason, many providers, like ExpressVPN and NordVPN, have obfuscated servers.

This functionality, which is also quite simple to use, is crucial for getting around strict censorship. Simply download and run your VPN software, browse for the list of secret servers, connect to one, and begin browsing.

If your VPN is shut off, you can try reconnecting to another server. The real kicker is that all of the leading suppliers offer you a wide selection of servers scattered all over the world. Certain providers, like Surfshark, even offer an IP rotator feature wherein your IP address is periodically altered on a routine basis.

Constructing an SSL or SSH tunnel will assist you in making your VPN untraceable, but it is a complex approach since it takes some manual setting. These are two main methods that are widely used to redirect online activity via encryption techniques protocols.

Consult your VPN service provider if you require any assistance in this instance.

A VPN ought to not be outlawed. The political goals are unquestionably overshadowed by the negatives. You don’t have to suffer as a result of such occurrences. All you need to do is utilize a VPN that can bypass the inherent restrictions.