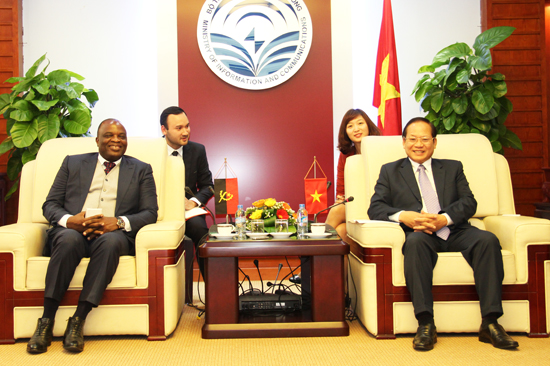 Vietnam and Angola are set to strengthen cooperation in the field of telecommunications and IT.

According to Mic.gov.vn – on March 13, at the headquarters of Ministry of Information and Communications, Minister Truong Minh Tuan had a meeting with José Cavarlho de Rocha – Minister of Telecommunications and IT of Angola.

Since 1986, the telecoms and IT industry have seen tremendous growth. The total revenue of the telecommunications industry in Vietnam was $ 16 billion, contributing 30% of the total ICT revenue in 2016.

Vietnam’s IT industry is developing strongly, with a higher annual growth rate than other sectors. The IT industry revenue in 2016 reached $ 41 billion. The reason for such impressive growth is due to the market’s healthy competition and favourable investment policies of the Government. Many leading IT corporations have been in Vietnam such as Samsung, Intel, Microsoft.

The goal of Vietnam is to build Vietnam’s Telecom-IT businesses to become international corporations in terms of capital, technology and management. Big corporations of Vietnam such as Viettel, VNPT, FPT… are also consolidating their position in the domestic market and investing overseas such as Southeast Asia, Middle East, Africa.

Minister Truong Minh Tuan also appreciated the position and role of Angola in Africa with the advantage of climate, long coast, strategic geographic location. Angola has great potential for the development of telecommunications and IT. If facilitated, large corporations of Vietnam such as FPT, VNPT and Viettel would be reliable partners of Angola, the minister noted.

Minister José Cavarlho de Rocha affirmed that the relationship between Angola and Vietnam had started in the past and was a good relationship. It is the responsibility of the two countries and the two ministries to jointly preserve, promote and strengthen this relationship.

Minister José Cavarlho de Rocha presented an overview of Angola’s IT and telecommunications market. He expressed his hope to meet with Vietnamese businesses and partners to learn about Angola’s market opportunities for Vietnam’s businesses. At the same time, Minister of Telecommunications and IT of Angola also wished that after this talk, the two sides would jointly build a common development path for benefits of both sides.

Minister Truong Minh Tuan said that Vietnam was ready to cooperate with Angola. Vietnam currently has strengths in four areas: Telecommunications, IT, Information Security and Human resources. He affirmed that the cooperation between Angola and Vietnam was built on the principle of equality and mutual benefits of the two countries.

At the same time, Minister Truong Minh Tuan expressed his wish that Viet Nam and Angola worked closely together and supported each other at international forums and organizations, especially international organizations such as the ITU.

Creating a unique platform for the regional tech companies, ICT Comm Vietnam 2017 is an international exhibition on telecommunications and communications products and services.