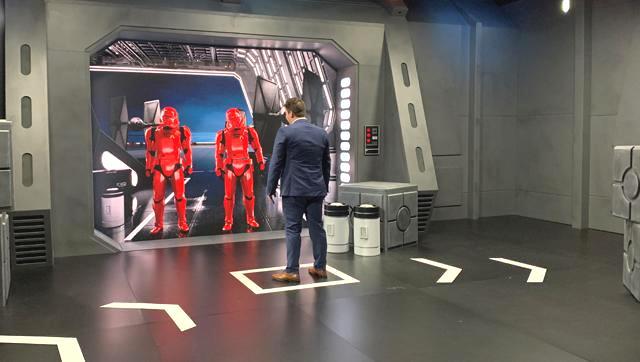 Verizon, The Walt Disney Studios StudioLAB, and ILMxLAB teamed up to explore how 5G can transform live entertainment experiences and capture moments built on 5G for the broadcast production at the world premiere of Star Wars: The Rise of Skywalker this week in Los Angeles.

The 5G tests represent the latest milestone in the companies’ collaboration to co-innovate and test how 5G can impact the future of entertainment.

The new troopers from Star Wars: The Rise of Skywalker appeared via a large LED wall screen, and were actually puppeteered digitally onto the screen, by actors in motion capture suits miles away in Verizon Media’s 5G studio. Attendees onsite were able to interact and even banter with these virtual Sith Jet troopers essentially in real time at feature film quality standing in a high-quality 3D environment, allowing for a uniquely personalized interaction.

It was all made possible by RYOT’s motion capture technology, NCAM system, and Verizon 5G Ultra Wideband’s low latency which allows for essentially real-time interactions with immediate feedback and two-way communication.

“Both the StudioLAB and Verizon believe 5G will fundamentally change everything about how entertainment media is created, distributed and consumed,” said Nicki Palmer, chief product development officer at Verizon. “Verizon’s 5G Ultra Wideband network is built to support transformative breakthroughs and has the potential to remake entire industries. Our relationship with Disney extends beyond 5G to offer customers the very best streaming through Disney+ offers for Verizon customers. Whether it’s for consumers or businesses, we’re delivering unique and enriched experiences.”

“The speed and low latency of 5G can unlock incredible creative capabilities,” said Ben Havey at Disney Studios StudioLAB. “We want to give storytellers early access to this new technology so they can continue to bring unparalleled experiences to audiences around the world.”

Verizon and the Walt Disney Studios StudioLAB announced at CES in January 2019 that they were joining forces to help develop new business models and solutions to advance production and storytelling through 5G.

The premiere 5G activations took place on Hollywood Boulevard in Los Angeles and the red carpet event was broadcast on Disney-owned channels including on Facebook, Twitter and YouTube.