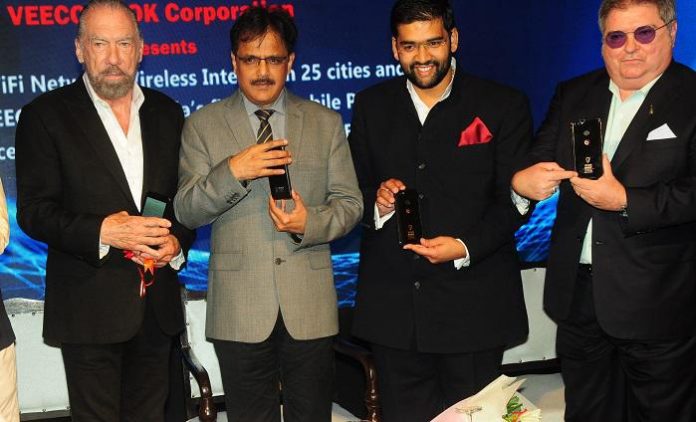 VEECON ROK Corporation Pvt. Ltd., a joint venture between VEECON Group and ROK Corporation, is partnering with BSNL to unveil City Wide Wi-Fi Network, to be established in 25 cities across India.

Five models of VEECON ROKiT mobile phones were displayed. The ROKiT One and ROKiT F-One are classic calling devices featuring WiFii calling. As its name suggests, the ROKiT IO Light is a lightweight smartphone that boasts impressive processing power. The ROKiT IO 3D and ROKiT IO Pro 3D are the first glasses free 3D smartphones to be introduced for sale in India. The ROKiT mobile series will be available for sale from early next year and will be bundled with BSNL SIMs.

Speaking on the occasion, Gaurav Kumar Srivastava, Chairman, VEECON ROK Corporation Pvt. Ltd. said, “We believe technology should improve everyone’s quality of life. The ROKiT range of phones are going to revolutionize the smartphone business the country as these are backed by the rich technological prowess of NASA Engineering. The unique feature of the 3D mobile phone is you don’t need to wear 3D eyeglasses to use it. Indian consumers today are well read, tech savvy and expect new technologies to come their way to surprise them. We are upbeat about the brand’s prospect in India as we believe with our ROKiT range we will be able to strike the right chord with them.”

“The City Wide Wi-Fi Network of 25 cities is in sync with our smart city Initiative and would be taken ahead with our Superior technology to drive this. We believe public and private partnerships effect serious positive change and we could not have found a better partner than BSNL to take this initiative ahead. The amalgamation of BSNL’s reach across the country and our cutting-edge technology is certain to be game changer in the business of running a city. For this project we plan to invest $5 bn in the next three to five years.” Added Srivastava.

Jonathan Kendrick, Co-Chairman and Co-founder of the ROK Group of Companies said, “We are glad to have introduced the first glasses free 3D mobile phone here in India. India is one of the fastest growing economies in the world with a huge consumer base for mobile handsets and we see a huge potential in the country for our products.”

John Paul DeJoria, Co-Founder, ROK Group of Companies said, “In line with the Government of India’s digitization drive, the City Wide Wi-Fi Network in 25 cities across India will bring the world closer to the people. We are thankful to BSNL for partnering with us to drive this ambitious project forward. We are positive about the success of the pilot project and looking forward to embark on the next phase soon.”

Anupam Shrivastava, Chairman & Managing Director, BSNL said, “I am pleased to be here at the launch of City Wide WiFi project for 25 cities. This is indeed going to be a landmark initiative towards providing internet to every Indian, quite in sync with the government of India’s Digital India programme. In the wake of arguably cutting edge technology and government initiatives, we are also pleased to associate with a emerging player like VEECON ROKiT and roll out this new range of mobile handsets.”