OnePlus is set to unfurl a new and innovative OnePlus 8 Series in India and across the world.

OnePlus has always focused its efforts towards creating a “fast and smooth” user experience since day one. These two words, alongside Never Settle, represent the foundation of the company’s “burdenless” design philosophy: a device should never hold users back or slow them down. But how is that implemented into a product?

Close on the heels of the announcement of OnePlus 8 Series launch, Pete Lau, OnePlus Founder and CEO, has shared a deep dive into the hardware setup on the upcoming devices and its links to the OnePlus mantra of ‘Fast and Smooth’. 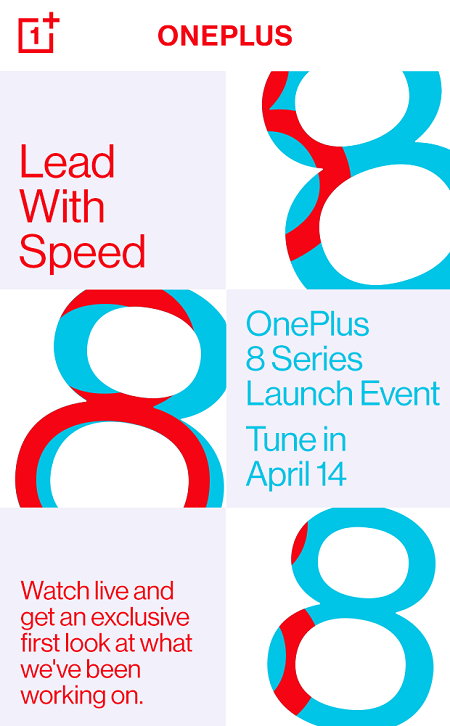 In the post, Pete talks about ‘our most powerful setup to date’ with the Snapdragon 865 SoC, coupled with LPDDR5 and UFS 3.0 that has come together for a dramatic increase in system performance, while reducing power consumption. This, coupled with the full 5G lineup and the software optimisations that we bring with OxygenOS will ‘deliver the fastest and smoothest smartphone experience possible’.

“We had already been making things “fast and smooth” for a long time, but this was officially set as a core strategy of our product development back in 2015. Since then, it has been tightly woven into OnePlus’ DNA, guiding the decision making for OnePlus products, from hardware selection to software configuration.

Smoothness is largely found through system performance. As a premium smartphone brand, OnePlus has always made its flagship products with the most robust hardware components to deliver smooth, fluid system performance. So, naturally, with the OnePlus 8 series, we started by laying a foundation with the best hardware available,” says Pete.

“Having announced our upcoming 120 Hz Fluid Display back in January, today I want to focus on what sits beneath that stunning, true-to-life screen – our most powerful setup to date: the Snapdragon 865 SoC, coupled with LPDDR5 and UFS 3.0, for a dramatic increase in system performance, while reducing power consumption. I know this may seem like a bold claim, so let’s go through the data:

The industry-leading Snapdragon 865 mobile platform improves over what was an already powerful SoC, offering a 25% increase in CPU performance, a 25% rise in GPU rendering times, while being 25% more energy efficient. It also offers a 16% reduction in power consumption when shooting videos and a 40% increase in video noise pixel processing power. Its AI performance is at least twice as fast as its predecessor, thanks to the Hexagon 698 DSP, which also offers 35% better power efficiency.

The newest generation of smartphone RAM – LPDDR5 – also makes its debut, maintaining OnePlus’ tradition of being among the first manufacturers to carry the latest RAM technology available. The transfer rate reaches a blazing 6,400Mbps at a bandwidth as high as 51.2GB/s. LPDDR5 is also built with power consumption in mind, achieving a 45% lower power consumption when compared with the previous generation,” he explains in the blog.

“UFS 3.0 flash storage might already be the current standard for flagship smartphones, capable of dramatically raising read and write speeds to about 1,700MB/s. But we’ve taken it a step further. Based on UFS 3.0, we’ve also added two new technologies to the mix—Turbo Write and Host Performance Booster.

Turbo Write uses the upper section of the ROM’s storage as a high-speed read/write interval. Here, in theory, each read/write will enter this high-speed buffer, and then proceed to the next command of data transfer.

In addition, HPB (Host Performance Booster) can further improve the random read performance after extended use.
But hardware alone can only take you so far. In fact, “fast and smooth” has never been achieved by just throwing the best components together. We put a relentless focus on software optimization, maximizing the performance of the hardware combination by only adding the features that truly matter to you, making an even better flagship smartphone experience,” Pete adds on.

“This drive to bring out the true power offered by the top-of-the-line specs comes to life with our specialized R&D team, literally named the “FSE Team” (Fast, Smooth, Efficient). We set up this team in 2016 with the sole focus on system optimizations. Its only objective is to ensure that OnePlus devices can deliver the fastest and smoothest experience possible, in a continuous and stable manner. In fact, we don’t even release products until they meet, or better yet exceed, the extremely high standards we set for ourselves.

We’ve also recently announced that the upcoming lineup would be 5G-enabled, allowing all of you to be among the first users in the world to enjoy the unprecedented speedy experience offered by the new generation of communications technology, leveraging the performance offered by the premium hardware and software combination of the OnePlus 8 series,” Pete says.