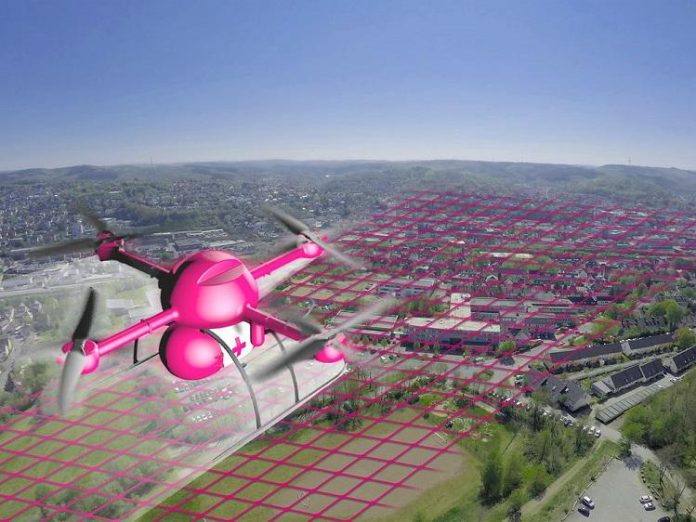 The university city of Siegen and Deutsche Telekom want to make drone flights for medical logistic purposes possible in the future. They have entered into a partnership to provide the necessary mobile communications infrastructure.

Deutsche Telekom will thus become a partner in the ongoing research project KODRONA (“Cooperative drone technology for medical applications”). The Bonn-based company is supplying a new type of campus network that enables the drones to be safely controlled remotely.

KODRONA is a pilot project in North Rhine-Westphalia that is investigating the use of unmanned drones in medical environments. The Federal Ministry of Transport and Digital Infrastructure has already funded the first phase of the project.

Transport drones fly back and forth in urban airspace between the DRK children’s hospital and the district hospital in Siegen. On an approximately 2.5 km long flight route, they transport medical laboratory samples of the young patients directly to the central laboratory. This way, the test results are available to the doctors much faster. The transport adapts to the current requirements. Currently, the laboratory samples are transported several times a day by taxi.

The tricky challenge: the drone pilots cannot see their aircraft directly. The rapid transport of the samples through the air is carried out outside their visual range. Up to now, the use of drones in the hospital environment has not even been generally permitted. And a permit is also required for the operation of drones outside of their visual range. This is to prevent collisions or dangerous approaches by a rescue helicopter. However, the new drone regulation of the EU opens up new possibilities in the future. For this reason, the Siegen project has already received special permission for the feasibility study from the relevant aviation authorities.

The pilot project in Siegen will now demonstrate how digital transport services for medical care can be set up and operated safely. Three hospitals, the University of Siegen and the city are working together with a drone manufacturer, a control room specialist and Deutsche Telekom on the innovative transport solution.

“We have the opportunity here to work with new technologies and put them to work for people,” says Dominik Eichbaum, project manager from the city of Siegen. “This also includes setting up the mobile communications infrastructure that supports the entire process. The drone pilots must control the aircraft via a secure mobile phone network and the drone control center must be fail-safe connected to it.

The aim of the joint project is to develop a prototype for the first time in a medical environment. It includes the development of a safe flight route outside the visibility of the drone pilots and the infrastructure for take-off and landing. This also includes the implementation of collision-free cooperative air traffic for transporting laboratory samples or other medical material between the hospitals.

The use of unmanned transport drones and transport containers is subject to applicable aviation and medical law. The drone pilots control the aircraft for this purpose via a secure mobile phone network at a flight altitude of 80m.

“Since the quality of the mobile phone coverage is decisive for the test operation, we carried out a real-time survey during the drone flight,” says Thomas Runge, Head of Economic Development of the City of Siegen.

“To ensure that pilots are allowed to fly the drones outside of their visual range, the aircraft transmit live images from a built-in camera to the control center. This requires a high-performance network and low latency. A particularly fast reaction time of the communications network is essential for delay-free control,” emphasizes Hagen Rickmann, responsible for the Business Customers at Telekom Deutschland GmbH.

The public LTE network (4G) forms the basis for data exchange. Telekom will commission a special campus network that will be available exclusively for communication between the drone and the control center. This will enable reliable data transmission even during temporary load peaks. This means that images and control commands are transmitted even faster and support the safe flight of the drones. The campus network is implemented using the existing antennas. The product “Campus-Netz M” is used in the project.

In recent months, the use of drones has already been prepared within the scope of a feasibility study. The next stage now comprises a test operation under real conditions. This will examine the dependencies of drone deployment on the weather, integration into operational processes and official communication interfaces, and cooperation with other parties involved.

Subject to follow-up funding, test operations will commence at the beginning of 2021.

In the long term, a fully autonomous shuttle service between the DRK children’s hospital and the district hospital in Siegen is planned for regular operation. In addition, the significance of 5G networks for such municipal applications is being investigated.