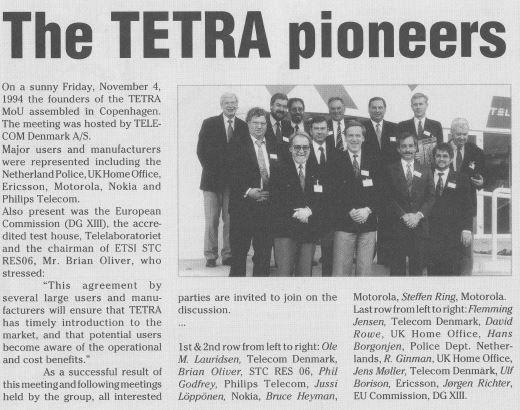 25 years ago today, a group of stakeholders in critical communications gathered in Copenhagen to create and sign the TETRA Memorandum of Understanding (MoU). Those individuals and their companies became the founder members of the TETRA MoU Association, now known as TCCA – The Critical Communications Association.

Over those 25 years, TCCA has grown to become a global organisation, continuing to drive the development of TETRA technology through its TETRA Industry Group and ETSI, but also catalysing and leading the development of critical broadband 4G/LTE and 5G standards.

TCCA’s core principle of open standards – the foundation for the success of TETRA – has remained unshakeable since those first pioneers came together in 1994. The TETRA market was built on the unique Interoperability (IOP) Testing & Certification Process, developed and led by TCCA’s Technical Forum (TF). The first TF meeting was held at the UK Home Office in London in February 1999, and the first IOP certificates were published in November 1999. 20 years later the TETRA IOP process continues to lead the world in independent certification for critical communications.

TCCA’s IOP process was developed to enable a truly open multi-vendor market for TETRA equipment and systems. This approach gives users clear benefits in terms of a wide portfolio of compatible equipment, competitive pricing and rapid development of new product models. The IOP process also benefits industry by creating a wider accessible market, faster market take-up and greater potential for investment in new developments. TCCA’s IOP testing is witnessed by an independent body, currently by ISCOM, part of the Italian Ministry of Communications.

TCCA is now working with partners such as the Global Certification Forum (GCF) to develop and implement a global MCX interoperability testing and certification regime, and works with an increasingly wide range of industry partners to advance critical communications worldwide.

Jeppe Jepsen is TCCA’s Board Vice-Chair, the Association’s Director of Broadband Spectrum and Director of International Business Relations for Motorola Solutions. He was Director of TETRA at Motorola when the original MoU was signed, and has seen the Association and the critical communications market develop first hand since 1994.

”Over these 25 years the Association has expanded the market to all parts of the world and all sectors of PMR/LMR. TCCA has developed across the critical communications broadband ecosystem to become the place where user organisations and industry can debate and clarify their common issues, and to be the honest place to obtain and share information” said Jepsen.

“Through lobbying of governments and regulators we have gained international agreement on broadband spectrum for PPDR, and we have set out, and continue to drive, technology roadmap agreements across the demand and supply sectors.”

Tony Gray, TCCA Chief Executive, underlines the importance of industry and user cooperation and the countless days of work put in by volunteers to develop stringent processes for the development of technical solutions. “This 25th anniversary is another opportunity to publicly thank all our members, our partners and all supporters of excellence in critical communications. The impact that such a niche but crucial market has on the world’s safety and security cannot be underestimated, and we are proud that TCCA is firmly embedded at the centre of developments.”

The importance of standards

Brian Murgatroyd, Chair of the ETSI TC TCCE (Technical Committee TETRA and Critical Communications Evolution), outlines the reasons why TETRA has been such a long-lasting success and the choice of critical communications users.

“TETRA was conceived at a time when there was a need to provide reliable, secure and inter-operable digital mobile radio services for professional users. This was made a reality by the development of an open standard of really high quality and detail. It was produced by experts from several mobile radio companies and governments, devoting years of painstaking work and who foresaw the possibilities of a modern digital system that would offer many functions and services. An open standard has ensured good competition between manufacturers which has kept prices affordable and most importantly has encouraged continuous innovation,” said Murgatroyd.

“The TETRA standard was first developed in the 1990s but is still being improved today and is seen as having a long- term future well into the 2030s and beyond. It now consists of more than 130 separate technical specifications and more than 35 technical reports and guides.

“However, although a good standard is the basis of success it could not have happened without the co-operation of users, operators and manufacturers, hence what is now called TCCA was conceived and has always had a very close connections to ETSI and the TETRA standard.

“We are still developing the TETRA technology to ensure it will still be fit for purpose for the next 20 years, but we have extended our remit to cover developments of specifications for critical communications broadband services. In particular we are developing new interfaces to ensure successful interworking between TETRA networks and mission-critical broadband systems. We wish TCCA a great future for another 25 years.”