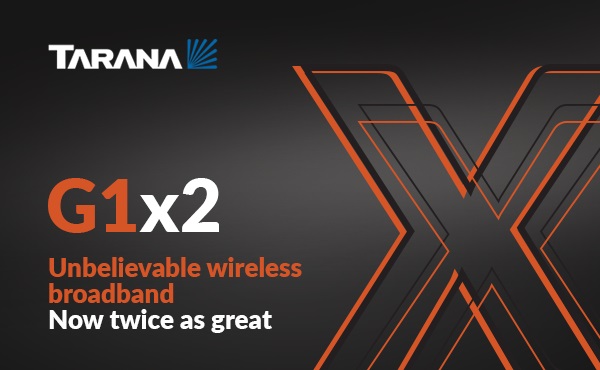 Tarana’s G1 ngFWA platform has been embraced by more than 190 ISPs in 8 countries in its first year of commercial shipments. G1 base nodes sold to date are expected to cover 20 million households and will have the capacity to serve as many as 1 million subscribers when fully deployed in the coming months — an unprecedented inaugural achievement.

Tarana’s next G1 releases will take two new directions. First is operation in the 6 GHz unlicensed channels being opened up in the US, Canada, and soon other countries around the world. Second is the introduction of G1x2 mode, a software update that doubles the current 80MHz bandwidth of the G1 platform to 160MHz, organized as four independent 40MHz carriers — in either 5 or 6 GHz or both — to deliver up to 1.6 Gbps in aggregate for each G1 link. The Tarana team showed compelling demonstrations of G1x2 mode at its Digital Multiply launch event held today. Operation in G1x2 mode will also be an option available for currently shipping 5 GHz G1 BNs and RNs, with accommodations required for the new rate/reach metrics involved.

Sergiu Nedevschi, Tarana’s Chief Strategy Officer, said “G1x2 reveals the power of a fundamentally different physical layer designed specifically for home broadband. It has been a massive decade-long undertaking and today we are demonstrating that our ngFWA foundation scales — this is a huge step, and there are more to come.”

Jim Higgins, CEO of Digital Path, reported, “Our team worked with Tarana to test G1x2 on our network this month, and the performance we saw in near- and non-line-of-sight conditions was just outstanding. We can’t wait to put it to work for our subscribers with the higher-speed plans it will enable.”

Basil Alwan, Tarana CEO, added, “The gap between fiber economics and wireless performance has led many to believe that the world’s digital divide problem is economically unsolvable. Today we further revealed the trajectory of ngFWA technology and it clearly shows non-line-of-sight wireless, in both licensed and unlicensed bands, can deliver high performance ‘end-game’ broadband to homes and businesses alike. It’s another impressive case of technology and innovation creating all-new possibilities.”