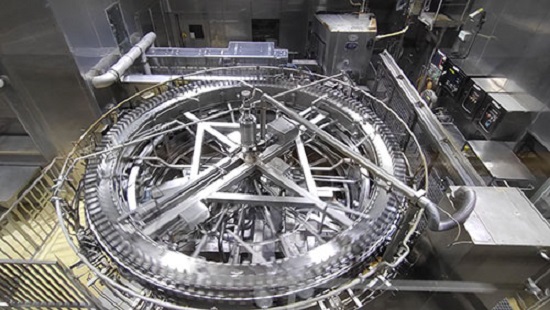 This system is planned to begin operation in late May at the can filling line at Suntory’s Natural Water Beer Plant in Kyoto, Japan. The project is being promoted in collaboration with Suntory System Technology Co., Ltd., which is responsible for the Suntory Group’s IT technologies, and activities are being conducted with an eye to expanding the project to each Suntory Group company.

Traditionally, at production lines at manufacturing sites where mass production is undertaken, field personnel mainly use sensor data from equipment to monitor usage thresholds. However, there is a need for experience and know-how in order to understand the fine changes in individual data, and passing these skills along is a challenge.

This new anomaly detection system is centered on NEC Advanced Analytics-Invariant Analysis, which uses Invariant Analysis Technology, part of NEC’s leading-edge AI technology group, NEC the WISE. By collecting and analyzing a large amount of time-series data from a large number of sensors installed in facilities through control systems such as PLCs (Programmable Logic Controller), modeling invariant relationships between sensors (invariants) and comparing changes between predicted data with actual data, users can detect “irregular” occurrences at an early stage. This system takes advantage of the features of White Box AI and provides information necessary for taking action at maintenance sites, such as where and why functions are performing abnormally. When modeling, users can easily visualize conditions by simply entering the sensor information they want to see with the time that those sensors were operating.

A new can filling line using IoT will be started in April at Suntory’s Natural Water Beer Plant in Kyoto in order to accelerate DX in production lines. In this line, NEC’s system will automatically discover the relationships between approximately 1,500 sensors, and issue alarms when changes occur, thereby detecting equipment anomalies at an early stage and helping to resolve them as soon as possible.

Moreover, NEC will install microphones near filling machines in order to analyze when sounds are different from usual, which could possibly indicate an abnormality with the system.

In the future, it is expected that these advancements could help to reduce the number of people required for maintenance work, while helping to detect abnormalities more quickly.

“Through the provision of this system, NEC is supporting the stable operation of facilities, preserving expert know-how and experience, recognizing errors that are difficult to detect, and contributing to the DX of production lines,” said Masayuki Ikeda, General Manager, AI Analytics Division, NEC Corporation.