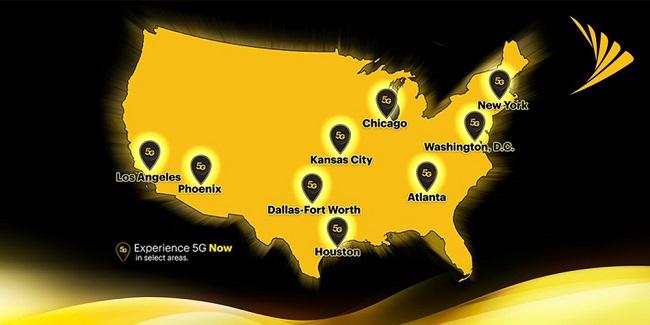 Sprint’s on-the-go customers are among the first in the world to experience the power and performance of True Mobile 5G with the largest initial 5G coverage footprint in the U.S.

The next generation of wireless service is here, delivering blazing-fast speeds in areas of Los Angeles, New York City, Phoenix and Washington, D.C.

With today’s launch, Sprint’s True Mobile 5G service is now available in areas of nine markets. In May, Sprint launched 5G service in areas of Atlanta, Dallas-Fort Worth and Kansas City, following with Chicago in mid-July.

Sprint 5G covers approximately 2,100 square miles, with approximately 11 million people expected to be covered in total across all nine market areas in the coming weeks, more than any other U.S. carrier to date.

“We’re proud to give Sprint customers their first truly mobile 5G experience in some of the biggest cities in the U.S.,” said Sprint CEO Michel Combes. “With our initial nine market launches complete, it is just the start of what we can achieve with T-Mobile, together building a better, faster, nationwide mobile 5G network that benefits all U.S. businesses and consumers.”

“We are delighted to partner with Sprint to support the launch of 5G in some of their largest markets,” said Rajeev Suri, Nokia President and CEO. “We have long collaborated on the deployment of our Massive MIMO and 5G innovations, and it’s exciting to see our joint work come to fruition. The cities we’re launching today are among the largest and most dense urban markets in the U.S., requiring significant expertise and stringent testing to ensure quality, performance and delivery.”

•New York City: Sprint True Mobile 5G will cover approximately 1.7 million people with service available in parts of Manhattan from Central Park to the southern tip. Sprint 5G service is available in parts of Midtown East and West, including popular destinations such as Times Square, Chelsea Piers, Rockefeller Center, and the areas around Jacob Javits Center and the Port Authority Bus Terminal. In addition, Sprint 5G service can be experienced in parts of the Upper East Side including Lenox Hill and Yorkville areas; and the Lincoln Square area of the Upper West Side, as well as parts of Greenwich Village, East Village, and Chinatown in Lower Manhattan. Sprint 5G also covers the ingress and egress to La Guardia and JFK Airports, parts of Flushing and Rockaway Beach in Queens, Red Hook in Brooklyn and Concourse in the Bronx. In New Jersey, Sprint will cover areas of Hudson County including Union City and North Bergen.

In its previously launched 5G markets, Sprint continues to expand its 5G coverage.

•In Dallas-Fort Worth, Sprint is expanding 5G service into Richardson, Plano, Garland and Euless, as well as parts of southern Dallas and northern Fort Worth.

Sprint also announced the availability of its fourth 5G device today – OnePlus 7 Pro 5G. It will be available beginning Aug. 27 in select True Mobile 5G market retail stores and on Aug. 28 at www.sprint.com/oneplus5G or by calling 1-800-SPRINT1. Beginning Sept. 6, it will be available in all Sprint retail channels.

“We’re thrilled to offer customers some of the world’s most innovative 5G devices from leading manufacturers,” said Dr. John Saw, Sprint CTO. “These exceptional devices paired with Massive MIMO technology and our 2.5 GHz mid-band spectrum will give Sprint customers a truly mobile 5G experience all across these great cities.”

Unleash the Power of 5G with Unlimited Premium and Hatch
Unlimited Premium is the plan of choice for Sprint’s 5G-enabled phones with nationwide Unlimited data, talk and text, Hulu, Amazon Prime, Twitch Prime, Tidal HiFi, full HD streaming and 100 GB LTE mobile hotspot. As Sprint’s best Unlimited value, it costs just $80 per month with AutoPay for one line – a value of nearly $150 per month.3 Customers can also pair a 5G device with an Unlimited Plus service plan.

Hatch features unlimited on-demand access to a curated portfolio of more than 100 premium mobile games, including exclusive Hatch Originals like Angry Birds GO! Turbo Edition and Arkanoid Rising. It also includes a rich social gaming experience – competitive leaderboards and shared gameplay sessions with voice chat and the ability to connect with friends and join live tournaments. Hatch Kids is a safe space for kids to play, create and learn without advertising or in-game purchasing.

As Sprint launches True Mobile 5G in metro areas of nine U.S. markets, the company continues to advocate for a merger with T-Mobile to accelerate the deployment of a ubiquitous, nationwide 5G network that includes coverage in rural locations.

The combined company will have the resources and technology to build a 5G network that fuels innovation across every industry, dramatically increasing competition, unleashing new economic growth, and creating thousands of jobs and billions of dollars in U.S. economic value. Together, the combined company will lead the world in next-generation technology services and applications, bringing 5G service to nearly all Americans.