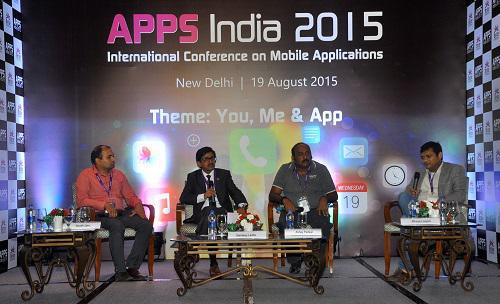 The shift from e-commerce to m-commerce is accelerating, with Indians engaging with their mobile shopping, news and personalized apps almost round the clock making Indian mobile app usage outpacing global app usage thereby resulting in India app usages grow by 131%.

Industry players such as Google, IBM, Telecom Sector Skill Council (TSSC), Impetus Infotech (India) Pvt. Ltd, Vserv, Junglee Games besides many entrepreneurs and organizations associated with developing, producing or consuming Mobile Apps converged at ‘Apps India 2015’ -an International Conference on Mobile Apps to discuss the current and future trend of apps and to deliberate and develop specific areas of growth opportunities and challenges being faced in the mobile apps industry and for collectively building a robust Apps environment in India concluded that: 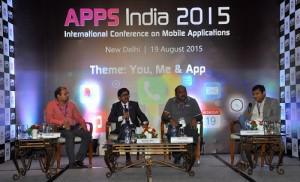 Mobile Apps are playing a pivotal role in creating employment and entrepreneurs, enabling ease in doing business and driving inclusive development through e-Education, e-Governance, e-Health Apps and e-Commerce. Infact, Mobile Apps are an integral part of our lives today.

Around 9 billion apps will be downloaded in India in 2015, more than five times the number of apps downloaded in 2012 (1.56 billion) at a cumulative annual growth rate (CAGR) of 75 per cent.

“At present the App economy has created about 75,000 direct jobs in India, and has the potential to reach 6,00,000 over a period of time. India App ecosystem is estimated to be in the range of USD-330 mn (INR-2,000 cr) by 2016.” Said Sandeep Ladda, Partner & India Technology and e-Commerce Sector Leader, PwC.

The revenues from paid apps are estimated to exceed Rs. 1500 crore in 2015, up from Rs. 900 crore in 2014, driven by increased app usage on smartphones. “Also, expansion of 3G network coverage and the rollout of 4G networks in 2015 are expected to further boost smartphone sales in the country,” the report said.

India is expected to have the largest number of software developers by 2017. It has around 300,000 app developers and is already the second largest Android developer community in the world.

By 2016, average data usage per subscriber in India is expected to double and the number of smartphones is expected to cross 200 million, driving 4G services. Mobiles may continue to gain importance as a channel to drive growth of mobile apps.

With more than 300 million internet users, India has the second largest internet user base in the world. It is estimated that the number of Internet users in India will touch 503 million by 2017, from the nearly 278 million users it had in October 2014.

“The next wave of growth in the Indian Mobile Apps is being driven by the increased usage of smart phones coupled with low mobile tariffs bridging the digital divide between metros, non-metros and rural areas. Users’ accessing the Internet through their mobile devices has become a key driver for the growth of mobile apps.” Said Ashay Padwal, Co-Founder & CTO,Vserv.

“Burgeoning smartphone and mobile internet usage, a growing developer community and the potential for regional/localized apps shall be the key factors to usher an app revolution in India.” Said Bharat Lingam, Ceo,(X)cube LABS.