SK Telecom has launched ‘oksusu Social VR,’ a mobile social VR app that enables users to interact with each other while jointly watching Over-the-Top (OTT) content such as sports games, movies and TV shows in the same virtual environment.

’oksusu’ offers a total of 170,000 movies, TV dramas and video-on-demand created by 115 channels. It is the largest OTT platform in Korea with 10 million subscribers.

By accessing the app wearing a VR headset, users who are remotely located can gather in the same VR space to watch ‘oksusu’ video content and engage in conversations feeling as if they are right next to each other. Up to eight users can gather in one virtual room to share experience. The app offers many different themes of VR spaces such as living room, movie theater, concert hall, sports room and e-sports room. Plans are ahead to enable users to set up and decorate their own virtual rooms.

In the virtual environment, each user appears as an avatar, which can be deeply personalized by selecting face shape, hair style, eye/nose shape, skin color, clothes and accessories.

With the application of gesture recognition technology, avatars can mimic user’s gestures in real time. For instance, they can pick up and throw popcorns, wave cheer sticks and fly paper planes in the VR space. In addition, T-Real Avatar Framework, which includes Blend Shape technology, has been applied to easily adjust avatar’s face/body shape and realize natural facial expressions.

Within the virtual space, users can move to other seats anytime using the controller. Also, with the application of 3D spatial audio, ‘oksusu Social VR’ supports more realistic and intuitive communications.

Furthermore, with the commercial launch of 5G, ‘oksusu Social VR’ will offer 8K UHD (7680X4320 pixels) video, which boasts 16 times better resolution than full HD. For instance, the VR room can turn into an IMAX theater or 360-degree screen.

‘oksusu Social VR’ currently supports two types of mobile VR platforms, namely Gear VR and Daydream. oksusu Social VR for Gear VR is distributed via the Oculus Store and the Daydream version of the app is available on Google Play. ‘oksusu Social VR’ will also be added to the oksusu app within this month.

Starting today, free live streaming content of oksusu can be enjoyed free-of-charge by users of ‘oksusu Social VR’ and plans are underway to include VOD content to the service within this year. 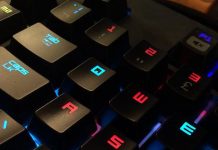 How To Play Triple AAA Games On Your Phone

Why Are Online Casinos So Popular?