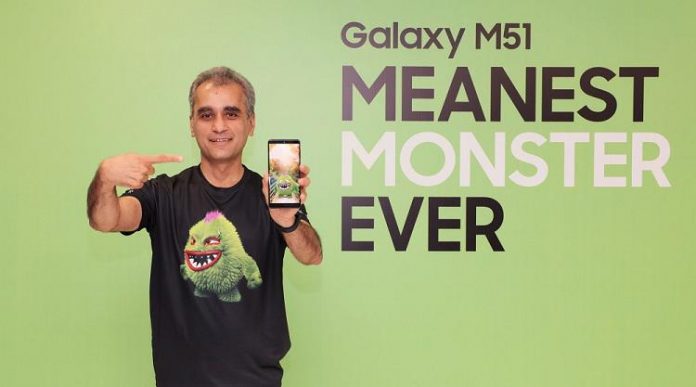 Samsung, India’s most trusted smartphone brand, announced the launch of Galaxy M51, its most powerful and premium M Series smartphone for the tech savvy millennial and Gen Z consumers.

“Galaxy M series is becoming one of the largest and fastest growing smartphone brand franchises in India, by crossing USD 3.5 billion in gross merchandise value (GMV) by the end of 2020 (less than two years of its launch). This is testimony to the enormous popularity of the M Series smartphones that have been designed ground-up for the young Indian millennials that prefer to shop online. Galaxy M51 is the latest and the most powerful of all the M series models launched ever. With the only 7000mAh battery industry-wide, and the host of other spectacular features, the Galaxy M51 rightfully lays claims to its marketing campaign tagline of the “Meanest Monster Ever,” said Asim Warsi, Senior Vice President, Samsung India.

“Since its launch on Amazon.in, Samsung M Series has been a consistent bestseller. Galaxy M51 is the most exciting addition to the M Series with its industry re-defining features crafted with deep consumer insights shared by Amazon.in. We are already seeing a great response to Galaxy M51 in terms of notifications & searches. This is one of our biggest launches for customers this festive season on Amazon.in and promises to be a Monster bestseller,” said Manish Tiwary, Vice President, Amazon India.

Galaxy M Series is known for its power-packed features, including monster battery for long-lasting performance. Since the launch of M series in early 2019, Galaxy M smartphones were the first Samsung devices to come with segment-leading 5000mAh and 6000mAh battery to address the consumers’ increasing need of all-day battery performance. With Galaxy M51, Samsung is taking its monster battery proposition to a whole new level.

Galaxy M51 sports a quad-camera setup, with 64MP main Sony IMX 682 sensor for capturing stunning photos, day or night. The 12MP Ultra-Wide lens on Galaxy M51 has a 123-degree field of view for capturing the world as you see it, while the dedicated 5MP Macro lens does a great job of capturing close-up shots.

Galaxy M51’s 5MP depth lens takes amazing portrait shots with live focus. Galaxy M51 has amazing video capability with 4K recording and it supports hyperlapse, slow-mo and super-steady modes. Galaxy M51’s 32MP front camera also supports 4K video recording and slow-mo selfies. Galaxy M51 combines powerful camera hardware with Intelli-Cam features such as ‘Single Take’ to elevate the camera experience to a whole new level. With ‘Single Take’, all you have to do is press record at the right moment and Galaxy M51 will capture the footage, up to 10 seconds of it, and then use AI to produce up to 10 different outputs – 7 photos and 3 videos.

“Powerful performance is one of the bedrocks of the Snapdragon 730G, creating an exciting differentiator for the Samsung Galaxy M51. The intelligent on-device Qualcomm® AI Engine, select Qualcomm® Snapdragon Elite Gaming™ features, and true HDR gaming of the Snapdragon 730G, along with 4K HDR Video capture, brings extreme realism, richer graphics, and cinema-quality processing to the M51. We are thrilled to work closely with Samsung on their latest addition to the M series, which is a complete package of powerful and premium experiences that users were looking for,” said Rajen Vagadia, Vice President, Qualcomm India Private Limited and President, Qualcomm India & SAARC.

There would be a limited period introductory launch offer from September 18 to September 20, 2020 on Amazon.in. Customers using HDFC credit and debit cards would get up to INR 2000 instant cashback on both EMI and non-EMI transactions when they purchase the Galaxy M51.