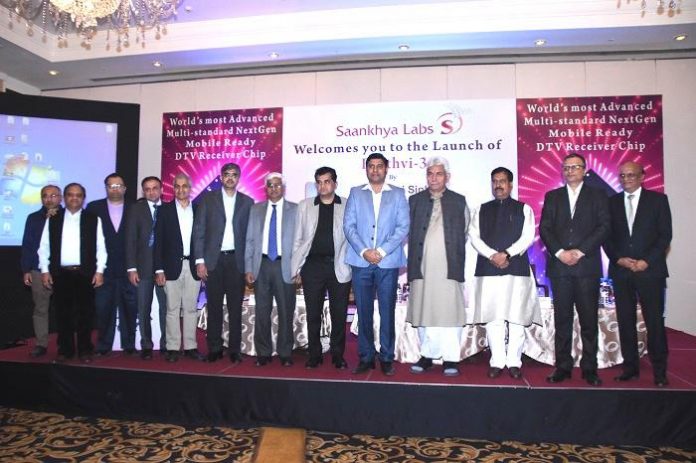 Highlighting the development, Amitabh Kant, CEO Niti Aayog, said, “We are delighted that Saankhya Labs, a homegrown semiconductor company, has very successfully designed and developed the most advanced multi-standard, next generation TV system on a chip. This is really remarkable because Indians always get into sunset industries rather than sunrise industries and by the time we do it’s too late. I am particularly delighted that they have 27 international patents. This is a very commendable achievement, and this will propel not only Saankhya Labs, but will propel India into the global arena. It’s a major milestone for India’s semi-conductor and hardware industry and will make India self-reliant in communications technology in the long run, as well as contribute to global telecom IPR. I think the time has come that we move from merely being a manufacturing nation to being a knowledge nation which innovates and creates value for the world, which is what Saankhya Labs is doing.”

Shashi Shekhar Vempati, CEO Prasar Bharati said, “This is very proud moment for India. I see this as a convergence of Make-In-India, Start-up India and Digital India and the future of mobile, broadband and broadcast convergence. The future of terrestrial TV is direct-to-mobile and for direct-to-mobile to happen we will need chipsets embedded in mobile phones capable of receiving video signals on both broadcast and terrestrial networks, leading to a one-converged user experience for smartphone owners. I hope to see smartphones with this capability within a year or so for us to realize this convergence between broadcast and broadband. This will also help us unlock all the potential of the public investment that we’ve made in the terrestrial broadcasting industry.”

Parag Naik, Co-Founder and CEO, Saankhya Labs in his address said, “It is a privilege to unveil this “Make in India” chipset to the world. Indigenously designed and developed by Saankhya Labs, the Pruthvi-3 family of processors are designed to drive the next generation communications architecture required in the ‘Convergence era’ of broadcast and broadband infrastructure. Powered by our award-winning, patented Software Defined Radio (SDR) architecture, SL-30xx and SL-40xx can support worldwide broadcast communication standards and targeted for use in the Mobile, UHDTV, STB, IoT and in-vehicle entertainment.”

Saankhya Labs is also working on its broadcast-broadband convergence solution. This solution enables telecom service providers to offload video traffic from their mobile network onto the broadcast network. This will help decongest mobile spectrum use by removing video traffic that accounts for maximum data use. This will improve better usage of mobile spectrum and help reduce call drops and improve voice-call quality. Video traffic is the fastest growing traffic on mobile networks. World over, about 60% of mobile data usage is by video content, and this is expected to increase to over 75% by 2022. This solution not only helps the service provider, but also will help broadcasters such as Doordarshan to monetize their broadcast spectrum by reaching 300+ million additional subscribers enabled by mobile reception. This chip will be a major enabler of this convergence solution.

The current chip is an improvement over the previous Pruthvi chip that was launched in 2015. The Pruthvi-3 is an advanced SDR SoC manufactured in 28nm FDSOI process supporting advanced Physical Layer functionality. Advanced computational capabilities coupled with, ultra-lower power consumption and small foot print makes it an ideal choice multiple applications including mobile devices. The Mobile ready version is a first-of-its-kind that supports most advanced IP based Next Gen Terrestrial TV reception.

Saankhya Labs is India’s first vertically integrated fabless semiconductor and systems company offering solutions for telecom, broadcast, defence and satcom industry. Since its inception in 2007, Saankhya Labs is widely recognized for pioneering work in SDR communication and has been awarded 27 patents with several international and national awards to its credit. The launch of Pruthvi 3 is a major milestone for India’s semiconductor and hardware industry and is a great step towards our shared goal to make India self-reliant in communication technology and contribute to the telecom IPR.

Verizon Partners with World of Warships to Elevante Gaming Experience