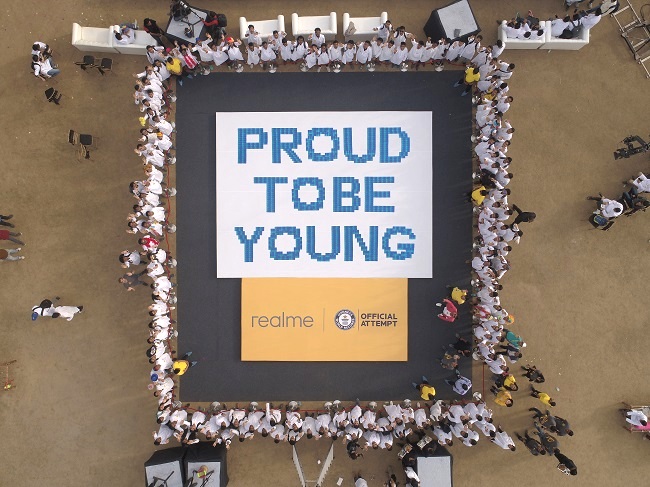 Realme has achieved another milestone by earning a title by creating the Largest mobile phone sentence at New Delhi on 16th March 2019.

Realme 3 has adopted a 3D Gradient Unibody Design to achieve a singular and seamless product experience. In order to let fans and media experience the stunning and reflecting effect of the Radiant Blue variant, Realme organized a day long celebratory event which is the first ever “Realme Holi Party”.

The young brand invited 500 fans to experience the Radiant Blue variant of newly launched Realme 3. The entire event was themed around gradient blue and green colors.

Sharing his joy on the occasion, Madhav Sheth, CEO, Realme India said, “At Realme we truly cherish our customers and fans and they are the real brand ambassadors of Realme. I would like to extend our gratitude towards the fans to create the record today. 1024 is also a popular number that has been widely applied in technology industries, so we chose it to represent our attitude as a product-driven company.”

“We are overwhelmed with the responses we have received towards Realme 3. We sold 2.1 lakh devices in a short time during the first sale and became the segment leader in 2019. We are sure to create many more such records going forward,” he added.

Speaking of the new world record, Swapnil Dangarikar, Official Adjudicator, GUINNESS WORLD RECORDS said, “Realme has created a new GUINNESS WORLD RECORDS title for the largest mobile phone sentence using 1024 phones. It’s an amazing display made of their brand new Realme 3 Radiant Blue phones and we congratulate them on this achievement. I can now say that they are Officially Amazing.”

As a part of the 5 million sales milestone celebrations both of the variants of Realme 3 with 3GB RAM + 32GB ROM and 4GB RAM + 64GB ROM will be priced at INR 8999 and INR 10,999 respectively for the next 1 million users. Realme 3 Dynamic Black variant will be open for sale again on March 19th, 12 noon onwards. The Radiant Blue variant of Realme 3 will be open for sale on March 26th, 12 noon onwards.

Realme is a technology brand that specializes in providing high quality smartphones. The brand was officially established on May 4th, 2018 by its founder Sky Li and Madhav Sheth in India, together with a bunch of young people who have rich experience in smartphone industry.