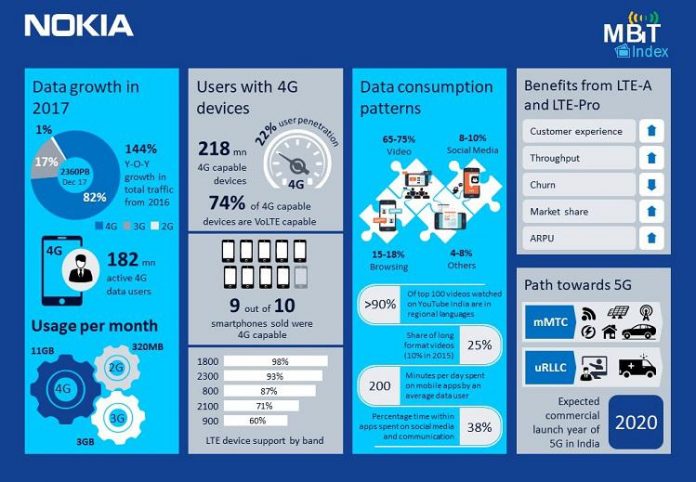 Nokia’s annual Mobile Broadband Index study of mobile broadband performance in India shows that 4G emerged as the key driver of mobile data consumption in 2017, capturing 82% of mobile data traffic and growing 135% YoY with the rapid deployment of 4G networks and affordable devices.

3G grew data grew 286% in 2017, driven by an increased appetite for data consumption and better coverage.

Indian telcos continued to rapidly expand 4G in 2017 and have narrowed the gap with 3G coverage in the country. The 4G network expansion was supported by the dramatic growth of LTE devices in the country, with 9 out of 10 smartphones shipped in 2017 supporting 4G. The LTE-capable device base grew to 218 million in 2017, with 74% being Voice over LTE (VoLTE) capable as well.

Service providers will need to take advantage of technologies such as 3-band carrier aggregation and 4×4 Multiple Input Multiple Output (MIMO) to transform their networks and sate the ever-increasing demand for data consumption without a glitch. The deployment of LTE-A/LTE-Pro and Cloud RAN will further enhance the customer experience.

Sanjay Malik, head of India Market, Nokia said: “The year 2017 saw telcos expand 4G networks, and this momentum is likely to continue. The drop in prices of devices, both smartphones and feature phones, is driving data consumption in the country. We believe that the next wave of growth in the Indian broadband market can come from the untapped base of feature phone users who will potentially move directly from 2G to 4G. As we mentioned in the last MBiT study, Indian telcos will need to explore innovative network technologies, like carrier aggregation and MIMO, to meet the growing data demand. These technologies will also help them prepare networks for the 5G and connected devices era.”