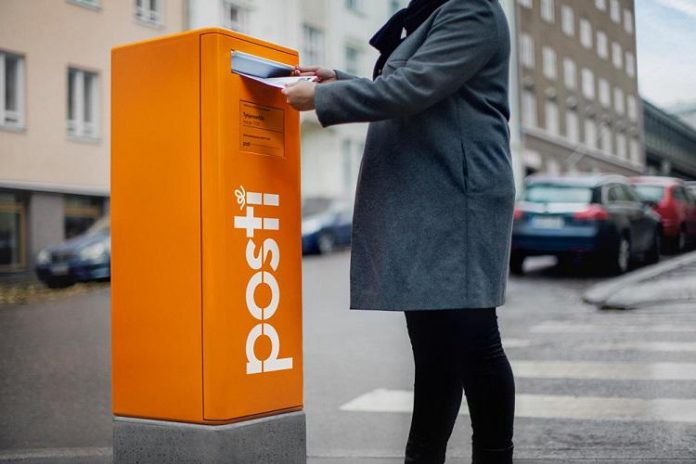 The Finnish postal service Posti and Telia Company have developed a new type of smart mailbox that is first in the world to utilize the new NB-IoT technology.

NB-IoT, Narrowband Internet of Things, is a new network technology that can be used to connect a large number of devices. A connected mailbox will provide information in real time on its use, such as if mail is dropped in the mailbox, if it’s full or empty, or if it has been opened or vandalized.

Posti, Sami Reponen”With a billion addressed mail items each year, this sort of information will safeguard the environment and save costs,” says Sami Reponen, Chief Process Officer at Posti.
“For example, if the time needed to process each item sent via Posti would take just a second longer than today, annual expenses would increase by 13 million euros. If we are able to save even 30 seconds of working time on unnecessary mailbox visits, the total benefit is significant.

Posti operates some 3,300 vehicles in Finland and their daily mileages add up to six times around the world, so the management of logistics flows is a crucial issue, Reponen adds.

From pilot to nationwide implementation

In the three-month pilot project, Posti and Telia will smarten up five postboxes in Helsinki and Oulu. If the trial is successful, the next goal is to turn all 5,000 boxes nationwide into smart postboxes.
“We installed the first sensor just before Christmas, and the results have been promising. Posti’s test group is also able to continuously monitor the use of the postboxes with mobile phones,” says Mikael Sundholm, Project Coordinator at Telia.

The new NB-IoT smart letterbox sends a warning once it is nearly full, thus saving the carrier from unnecessary trips to empty boxes.

Smart letterboxes are already in use across the world, but the latest result of the partnership between Posti, Telia and RD Velho is the first of these to utilise the new narrowband network technology. In other words, it is one application of the Internet of Things (IoT).

NB-IoT is an international network technology that can be used to connect a large number of devices affordably and reliably to a real-time data network. Some of the world’s largest telecommunications companies, such as Ericsson, Samsung, Huawei, Intel, Nokia and Telia are invested in NB-IoT.

“With this latest pilot project, we want to get involved with NB-IoT right from the outset. We follow the latest developments in digitalisation closely and are agile to adapt to new technologies. The next step is finding out what we can learn from the smart letterbox. Above all, the pilot seeks to test the NB-IoT network, which can be connected with a variety of features in the future”, says Sami Reponen, Chief Process Officer at Posti.

The new pilot project initially includes five smart letterboxes in Helsinki and Oulu. They are indistinguishable from old-fashioned letterboxes, as the sensors are installed in regular boxes that contain no labels or markings indicating their enhanced intelligence. In total, Posti operates 5,140 letterboxes across Finland.

“Telia is a fantastic partner for this pilot. In the future, they will operate a nationwide narrowband network, enabling us to introduce new services to all our customers”, Reponen explains.

A phone update for each sent mail

Each time the hatch of a letterbox included in the pilot is opened, the NB-IoT sensors activate. They report on the letters and cards dropped into the box in real time and notify when the box is full or nearly full. The sensors also alert in the event of possible vandalism.

Customers need not be worried over the privacy of letters. The mail is not scanned or photographed.

When there is activity at any of the letterboxes, the data is displayed on the phones of Posti’s five-person test group.

“I was on a coffee break during a business trip from Varkaus to Helsinki when I received a notice for the first time. Admittedly, the situation was quite thrilling, especially when considering the possibilities that this type of real-time monitoring enables for us”, Reponen says.

In the future, the plan is to transmit the information to the drivers’ own devices.

“For instance, when the mobile mail app notifies that there have been no new items at a box scheduled for emptying at 2 p.m., time and effort is saved for the mail carrier.

With a yearly total of a billion addressed items and 35 million parcels, it is not insignificant how well Posti is able to keep track of the movements of mail.

“Information conserves the environment and reduces costs. For instance, if the time needed to process each item sent via Posti would take just a second longer than today, annual expenses would increase by 13 million euros. If we are able to save even 30 seconds of working time on unnecessary letterbox checkups, the total reduced expenses are substantial.

In the pilot project, Posti is most interested in real-time data.

“We can instantly see if something is missed or if an error occurs at our end. We are then able to fix the problem before it causes inconvenience to customers.

For example, the carrier can be easily alerted if the letterbox has been emptied five minutes too early and a delivery has been dropped off after this. During peak seasons, such as Christmas, Valentine’s Day or Easter, it is essential to know which letterboxes are nearly full. In such cases, the standard mail route is not necessarily the ideal order for emptying the boxes. The pilot project also aims to assist in the management of logistics flow.

The benefits of “trips around the world”

Posti operates some 3,300 vehicles around Finland that drive a total number of kilometres equal to six times the world’s circumference each day. In addition to this, Posti’s trucks travel a daily distance equal to four and half trips around the world.

“With such mileages, we are eager to learn what else we could do aside mere driving. What are the possible uses for our vehicles’ data?”

Going forward, information from the smart letterbox sensors will be connected directly to Posti’s reporting system. “The goal is that each driver receives information on a 24/7 basis and that we are able to centrally monitor the movements of mail in real time”, says Reponen.

What, then, are Posti’s plans after these first few steps?

“Even now, there are some wild ideas being discussed. For instance, the letterboxes of a smart city of the future could report the daily weather or be used as a marketing platform or even a 5G network base station. The future is full of opportunities and surprises. Our drivers already record frost heave damages and traffic signs while delivering mail across the country. At Posti, we are excited for all new developments.”

According to Reponen, the eco-friendliness of Posti’s services will improve further once all mail items and delivery needs are tracked in real-time and routes can be optimised accordingly. However, the basic idea behind Posti remains the priority: people must receive their mail on time.

“I have promised to my mother, who lives in Varkaus, that she can be at ease while ordering shipments via mail and sending out letters and cards. We will deliver each one of them every day as agreed to their correct destinations, on time and undamaged. Besides, the promises you give your mother ought to be kept,” Chief Process Officer Reponen says, smiling.