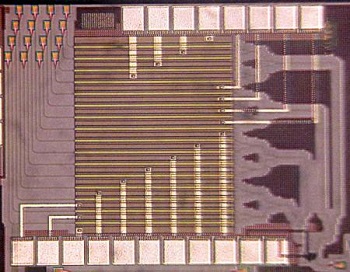 Researchers at the prestigious California Institute of Technology have developed a chip that can turn mobiles into projectors – showing a bright, clear image onto a wall or a big screen.

A new light-bending, silicon chip has been developed by researchers at California Institute of Technology (Caltech) that acts as a lens-free projector and could one day end up in your cell phone. The new chip eliminates the need for big and expensive lenses and bulbs as used by the traditional projector segment.

The most exciting part of this discovery is that these chips are small, can be made at a very low cost and opens up lots of interesting possibilities. Hajimiri and his team bypassed traditional optics by manipulating the coherence of light – a property that allows the researchers to ‘bend’ the light waves on the surface of the chip without lenses or the use of any mechanical movement. “By changing the relative timing of the waves, you can change the direction of the light beam,” Hajimiri added.

Using a series of pipes for the light – called phase shifters – the OPA chip slows down or speeds up the timing of the waves, thus controlling the direction of the light beam. The timed light waves are then delivered to tiny array elements within a grid on the chip. The light is then projected from each array in the grid, the individual array beams combining coherently in the air to form a single light beam and a spot on the screen. As the electronic signal rapidly steers the beam left, right, up, and down, the light acts as a very fast pen, drawing an image made of light on the projection surface.

Softwarisation, automation critical to the future of telcos: PCCW Global

Why Wi-Fi Calling is the Next Disruptive Telecom Technology