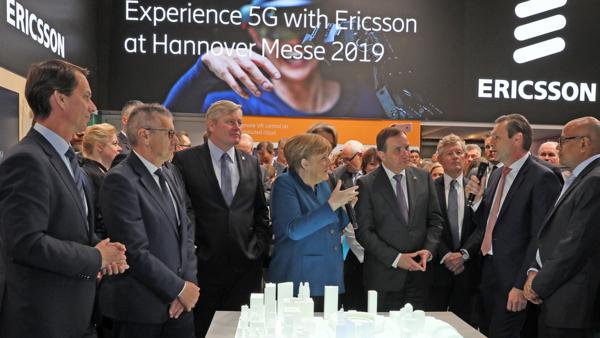 German Chancellor Angela Merkel and Swedish Prime Minister Stefan Löfven got a first-hand overview of the potential of 5G to transform European industry as Hannover Messe kicked off in Germany.

They were updated on the progress of the 5G-Industry Campus Europe – a joint industrial 5G research network initiative between Ericsson and the Aachen-based Fraunhofer Institute for Production Technology (IPT).

The two national heads of government visited Ericsson’s booth at Hannover Messe – the largest annual industrial expo in the world – where they heard how the development of Industry 4.0 can benefit from an integrated approach to researching the industrial use of 5G.

This is the approach taken in the collaboration between Fraunhofer IPT in Aachen and Ericsson’s R&D facility in nearby Herzogenrath. Called 5G-Industry Campus Europe, the collaboration researches how 5G can open-up new manufacturing industry uses cases– especially in process control – enabled by wireless transfer rates of up to ten gigabits per second and latencies of less than one millisecond.

Niels König, 5G Project Manager, Fraunhofer IPT, says: “A consistent next step in this regard could now be large-scale networking over and beyond Fraunhofer IPT. We have already prepared the ground here in the vicinity of RWTH Aachen University and with our international partners, for example at the Royal Institute of Technology in Stockholm, to thoroughly test the suitability of 5G technology in a joint research network for use in industry and thus to carry out important work to convince the decision makers.”

Jan-Peter Meyer-Kahlen, Head of Ericsson R&D Center, Aachen, says: “As one of the leading companies in the field of 5G, we attach great importance to understanding the requirements of the industry at an early stage in the development of the mobile communications standard within the framework of research cooperation. Suitable industrial 5G test environments play a very important role in this context, and the realization of this concept would also be another great example of the German-Swedish Innovation Partnership.”

5G-Industry Campus Europe is being presented at Hannover Messe from April 1-5, 2019 at the Ericsson booth in Hall 8, booth D28; and at the Fraunhofer joint booth in Hall 6, Booth A30.