Japan’s telecom operator, KDDI is introducing the Fx0 smartphone equipped with the Firefox OS to the Japanese market.

Firefox OS is the open mobile platform advocated by Mozilla Corporation (Headquarters: Mountain View, California; CEO: Chris Beard; hereafter “Mozilla”) and KDDI will be the first domestic telecommunications carrier to introduce such a smartphone to the Japanese market.

In order to utilize the Firefox OS’s features and achieve the new worldwide WoT (Web of Things) experience, which connects various objects using Web technology regardless of PC or smartphone, KDDI will create new values using its advanced knowledge and the ideas of freedom possessed by developers and designers.

The Fx0 is the first Firefox OS smartphone that supports high speed 4G LTE data communication and is equipped with the Qualcomm Snapdragon 400 processor. And it moves Firefox OS smartphones into a new stage with its detail to advanced functionality and design encompassing the openness of the Firefox OS and a futuristic feel achieved under the supervision of world famous designer, Tokujin Yoshioka.

“We’re excited to partner with KDDI to bring the first Firefox OS phone to the Japanese market,” “KDDI and Mozilla both believe in putting people in control of their online lives, by leveraging the Web as an open platform for innovation. The Fx0 is the most advanced Firefox OS phone that not only embodies openness through its impressive transparent design but empowers geeks and other users to become Web creators.” said Andreas Gal, CTO of Mozilla. 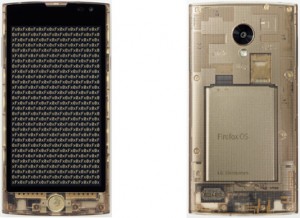 By equipping the Firefox OS, the open mobile platform advocated by Mozilla and powered by standard Web technology including HTML5, various network devices can be connected via the Fx0.
Equipped with a Web server function developed in part by KDDI. This function enables you to link with various devices using programming on the Fx0.

A simple local network can be created by simply touching Fx0 devices. Furthermore, the Web-cast function is equipped, which enables easy data sharing, such as currently playing video, Photo, and other digital content, between devices within the local network.

Connecting WEB programmers
By employing the Firefox OS mobile platform powered by standard Web technology, engineers that program using HTML5, JavaScript, or other languages can develop various applications and user interfaces through the Fx0.
Connecting embedded system engineers
By using the Gluin application development tool, the WoT (Web of Things) world linked with various embedded devices symbolized by ARM (R) mbed (TM)-enabled devices (ARM Ltd., UK) can be achieved.
Connecting designers
Equipped with the Framin app, which allows you to design your own lock screen. With this app anyone interested in graphic design can create their own custom lock screen by combining Internet information with sensors equipped on the Fx0.

It is equipped with an HD display. Intuitive operation is possible using a graphical UI.