A vulnerability in the Reliance Jio’s JioMoney wallet app has reportedly exposed personal data of JioMoney users. This came out in the open when CS Akshay, an independent security researcher explored and probed on the App Vulnerabilities for JioMoney.

As he probed further, he found out that users’ Aadhaar numbers were exposed, along with their critical details like their date of birth, when they verified their SIM card, and their JioMoney account MPIN.

It is important to note that CS Akshay, a security researcher started scrutinizing JioMoney’s code and he was able to put up a microsite where these details could be automatically-fetched, but took it down — and deleted his tweets on the subject too — after being approached by Reliance Jio. 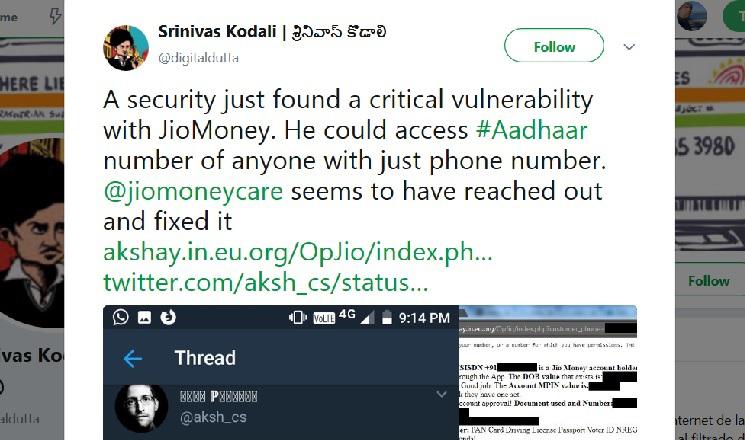 While Reliance Jio has not published details on the number of users which are enrolled on JioMoney, on the other hand, the company encourages its subscribers to download the entire Jio suite of apps, which includes JioMoney.

As far as JioMoney is concerned, it has got itself fairly entrenched in the Indian mobile driven commerce space – it also runs a payments bank, and is partnered with a number of insurance companies that lets users make premium payments as well. JioMoney also has  partnerships with Sodexo, Uber, Snapdeal and Dominos Pizza.