SoftBank Internet and Media, Inc. and Snapdeal have announced definitive agreements under which the SoftBank Group will become the largest investor in Snapdeal, through a total investment of $627 million.

Snapdeal, founded in 2010, has become the fastest growing and largest online marketplacein India, with more than 25 million registered users and more than 50,000 business sellers. Through this strategic investment and partnership with Snapdeal, the SoftBank Group aims to further strengthen its presence in India and leverage synergies with its network of Internet companies around the world. 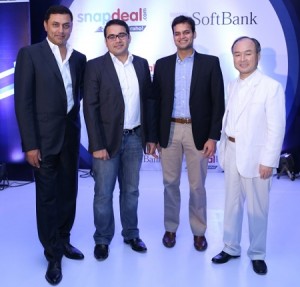 Masayoshi Son, Chairman and CEO of SoftBank Corp. said, “Since SoftBank’s foundation, our mission has been to contribute to people’s lives through the Information Revolution. We believe India is at a turning point in its development and have confidence that India will grow strongly over the next decade. As part of this belief, we intend to deploy significant capital in India over the next few years to support development of the market.”

Nikesh Arora, Vice Chairman of SoftBankCorp. and CEO of SIMI said, “India has the third-largest Internet user base in the world, but a relatively small online market currently. This situation means India has, with better, faster and cheaper Internet access, a big growth potential. With today’s announcement SoftBank is contributing to the development of the infrastructure for the digital future of India. We want to support the leaders and entrepreneurs of the digital future; Kunal and Rohit are two such great leaders.”

Kunal Bahl, Co-founder and CEO of Snapdeal said, “Our entire team at Snapdeal is thrilled and honoured to have SoftBank as a strategic partner. With the support of Son-san and Nikesh, we are confident we will further strengthen our promise to consumers and create life changing experiences for 1 million small businesses in India.”

Nikesh Arora will be joining the board of Snapdeal as part of this strategic investment by the SoftBank Group.