Korea based SK Telecom has announced that it will implement an IoT(Internet of Things)-based fish farm management system at an eel farm in Gochang, North Jeolla Province.

SK Telecom, together with BD Inc., is developing the management system which will improve the current farm management process with the help of IoT technologies based on wireless sensor networks and enable farmers to remotely monitor their fish tanks in real-time through smart devices including smartphone. 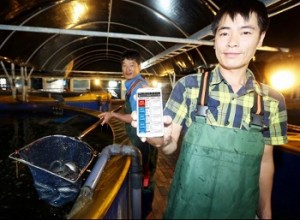 In general, each eel farm has twenty to sixty water tanks, each measuring 6m in diameter. Eel farming is a high value-added business, but the farming requires farmers to arrange human resources to manually observe several indicators of each tank all the time including water temperature, dissolved oxygen and pH (every two hours and six hours for the young fish and grown ones respectively) as even minor changes in the environment such as a sudden temperature change, oxygen deficiency or water pollution are fatal to eels.

Under the IoT-based fish farm management system, three sensors are installed on each fish tank to measure water temperature, quality and oxygen level. Then, a water quality monitoring equipment will digitize and display the data from the sensors and send them to ‘SUN (Smart Utility Network)’, a new near field communications technology, so that Gateway can collect and transmit them using LTE networks to Mobius, an open ‘IoT’ platform of SK Telecom. Mobius will then send the data again to a fish tank management server for analysis and finally the users can check the tank status on the smartphones.

The data flow through IoT Gateway to SK Telecom’s open IoT platform which will then analyze the data and send status check results to the farmers’ smartphones in real-time.

If any abnormality is found, even in the middle of the night, the management system sends alarm messages to the farmers on their smartphones so that they can swiftly respond, thereby ensuring stable and efficient farm management.

In addition, when the user inputs data such as the volume of feed or shipment, the system makes analysis of the data to provide meaningful statistics and comprehensive information on the fish growth.

Providing the real-time monitoring feature and optimal information on fish farming, the management system is expected to enhance productivity of farming business while bringing revolutionary change to the farm management process by enabling farmers to manage risk factors simply with their smartphones.

Meanwhile, the smart farm management project is partly funded by the government as it was selected as a public-private partnership technology project by SMBA (Small and Medium Business Administration) last July.

SK Telecom aims to commercialize the IoT-based fish farm management system in the first half of next year. After applying the system to about 450 eel farms across the nation, the company plans to expand the project to different species of fish.

Also, SK Telecom plans to enter overseas markets including Japan and China with this project based on its know-how and knowledge earned in Korea. In particular, a set of technologies used to implement the smart fish farm can also be widely applied to agriculture and livestock farming.

Choi Jin-Sung, Executive Vice President and Head of ICT R&D Division at SK Telecom, said, “In a new era where all things are digitally connected, ICT, including IoT, can raise productivity and bring innovation to traditional industries. SK Telecom is committed to using the company’s leading technological edge to enhance national competitiveness and revitalize local economies”.

Lighting Up The 21st Century – Part I