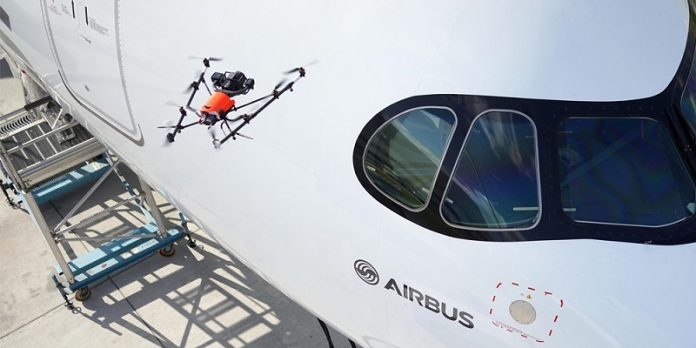 A team from Intel and Airbus demonstrated an aircraft visual inspection with a modified AscTec Falcon 8 with Intel® RealSense™ cameras.

The demo took place during this week’s Farnborough International Airshow in England on an Airbus passenger airliner.

“This collaboration and demo with Airbus showcases the advancements and innovation Intel brings to the drone industry,” said Anil Nanduri, vice president and general manager within Intel’s New Technology Group. “We believe this prototype showcasing the Intel RealSense collision avoidance technology on the AscTec Falcon 8 will further enable our products and our industry, as well as others.”

The images, especially the ones showing scratches, dents and painting defects, will be compiled in a 3-D digital model, recorded in a database and analyzed. This data will help to improve damage traceability, and also to prevent and reduce them.

In addition, the patented V-form octocopter performed a visual inspection on the upper part of the airliner using RealSense cameras for intelligent obstacle navigation and a 42-megapixel full-frame camera for data capturing.

Airbus’s aircraft quality inspection is an important step at the end of the production process before aircraft delivery. This proof of concept showcased the benefits of drones featuring Intel RealSense Technology in reducing aircraft downtime for inspection from two hours to less than 15 minutes.

A full-scale industrial test is underway on Airbus A330 aircraft, with further development planned on the company’s other aircraft programs.