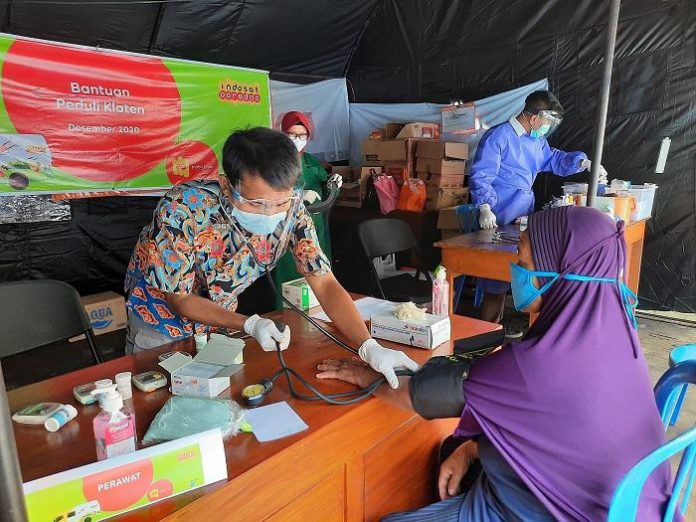 Indosat Ooredoo’s Mobile Clinics, which are based throughout Indonesia, played an active role in alleviating the suffering felt by people affected by disasters. Immediately after the local government issued a disaster emergency response status, Mobile Clinics were immediately deployed to provide the services needed for those forced to stay in refugee camps, including providing free medical assistance, distributing additional food aid packages, cleaning equipment, and telecommunication services to disaster-affected communities throughout Indonesia.

President Director & CEO of Indosat Ooredoo, Ahmad Al-Neama, said “We are very concerned about the Indonesian people who have been affected by disasters in several areas throughout Indonesia, especially in the current situation of COVID-19 pandemic. With our small assistance, we hope we can ease the situation. The company is committed to be present and helping people get through difficult situations until conditions is recovered.”

Several natural disasters have occurred during the months of November to December, in which the affected communities have received assistance from Indosat Ooredoo’s Mobile Clinic, including floods in the cities/regencies of North Aceh, Batanghari, Tebing Tinggi, Lebak, Asahan, and Batubara.

Apart from hydrometeorological disasters, there have been several other natural disasters due to the eruption of Mount Semeru in Lumajang, Mount Ili Lewotok in Lembata, and Mount Merapi in Klaten and Magelang.

Indosat Ooredoo’s Mobile Clinic continues to be alerted so that it can be immediately deployed to assist local governments in carrying out disaster emergency response activities up to the transition period towards post-disaster recovery. Throughout 2020, this CSR program in Community Development pillar has provided medical services and distributed emergency aid packages to more than 12 thousand people in need at evacuation sites.

The National Disaster Management Agency (BNPB) has appealed to the public to be more vigilant about the potential of hydrometeorological disasters that could occur from end of November 2020 to February 2021. Until December 11, 2020, hydrometeorological disasters consisting of floods, tornadoes, landslides and drought reached 1,015 events. Not to mention the threat of volcanic eruptions which are currently experiencing increased activity, such as Mount Merapi, Ile Lewotolok, and Semeru.