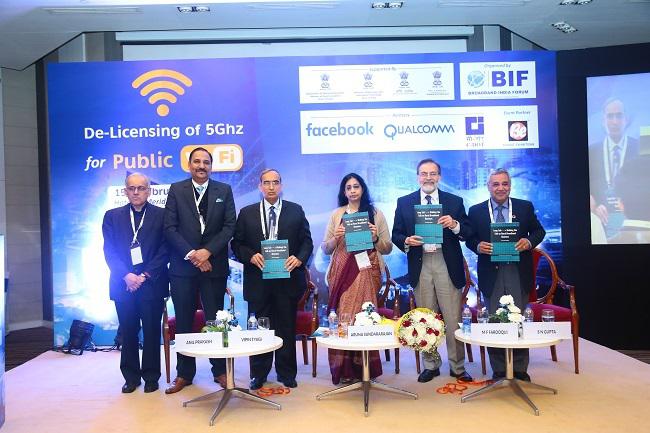 Government of India is working with TRAI and TSPs to deploy an interoperable Wi-Fi ecosystem based on the standardised WANI Architecture. It will have a transformational effect on the economy & fuel the rise of rural entrepreneurship and job growth

For Common man to enjoy the benefits of low cost ubiquitous Broadband, we need to decongest the existing spectrum bands for Public Wi-Fi

Being a low-cost technology, enhancement of delicensed spectrum for Public Wi-Fi will enable high speed, high capacity broadband coverage to a large population mass in an extremely affordable and ubiquitous manner

The special guest at the event, Aruna Sundararajan, Telecom Secretary and Chairman, Digital Communications Commission, Govt. of India reiterated this when she said that public Wi-Fi could bring the costs of broadband delivery from 22 paise per Megabyte to as little as 2 paise per Megabyte , thereby making it really affordable to the common man. She also mentioned that the release of 605Mhz of spectrum constitutes the largest release of delicensed spectrum in the world, greater than even the US & EU. This she said, will have a catalytic and cascading effect on the entire telecom ecosystem including handset manufacturers, ISPs and other stakeholders as many more Indians on the other side of the digital divide will be able to access high quality bandwidth at extremely low costs and using more affordable devices.

Public Wi-Fi is aligned to the government’s programme under the National Digital Communications Policy to identify, assign and allocate license exempt spectrum besides licensed bands for meeting the broadband targets. This also includes a target to install 5 million hotspots by 2020 and 10 million by 2022. This would enable the government to provide all-pervasive coverage and broadband connectivity to all.

Aruna Sundararajan, Telecom Secretary and Chairman, Digital Communications Commission, Govt. of India said, “The use of unlicensed spectrum has been one of the key enabling factors in the growth and widespread adoption of Public Wi-Fi. Accordingly, in an effort to provide maximum flexibility for innovation and lower entry costs for ubiquitous wireless devices that utilize the Wi-Fi standards, the move by the DOT to make the globally harmonized 5Ghz bands license exempt shall go a long way in meeting the Govt’s SDGs of providing Broadband to All in the fastest, most economical, efficient & ubiquitous manner through the process of creation of several thousands of additional Wi-Fi hotspots.”

She further added, “Data access needs to be further democratized and will need to go beyond fiber and towers as their deployment is cost and time intensive. This is where public Wi-Fi comes into play. It’s in the interest of TSPs to deploy public Wi-Fi as India has emerged as the world’s most data-hungry nation. The government is working with all stakeholders including TRAI and the service providers to ensure an interoperable ecosystem. An outcome of such an ecosystem will not just be cheaper high-speed data but will also foster a demand for low-cost devices. Indian manufacturers can take advantage of this and in the process also create the potential for 1 – 2 million jobs in the sector. Public Wi-Fi has the potential to add up to US$ 20 Billion to India’s GDP in a relatively short period of time”

TV Ramachandran, President Broadband India Forum further added, “Being one of the most price-sensitive markets globally, India’s need for an additional, license-exempt 605 MHz in the 5GHz band cannot be underestimated. In fact, the need is going to be for much more Wi-Fi spectrum from other bands in the future. One of the biggest advantages of having additional 605MHz in 5 GHz will be the ability to get multiple wide carriers in blocks of 20 MHz and higher (including 80Mhz) to deliver gigabit like speeds and help achieve carrier grade quality. It will also catalyze video traffic in India which will in turn also give a boost to sectors such as e-education, e-healthcare and other sectors that are especially relevant and impactful when seen from a rural perspective.”

The effect of such low-cost and high-quality bandwidth on India’s rural economy, a strong focus area for the government will also be transformational. Access to pubic Wi-Fi in the 5Ghz band will also fuel the entry of small/mid-sized players in the public Wi-Fi ecosystem and will further open up the rural economy and encourage village level entrepreneurship, as well as boost rural jobs and employment.

In continuation of its focus on providing Policy & Regulatory insights to help the country attain Digital India and Broadband for All through a liberalized approach for creation of Public Wi-Fi, Broadband India Forum brought together an eminent group of industry leaders to deliberate on the opportunities for India that will emerge from the delicensing of 605Mhz in the 5Ghz spectrum band. The group representing industry, academia and government also discussed the technology evolution that will result from the introduction of this band.