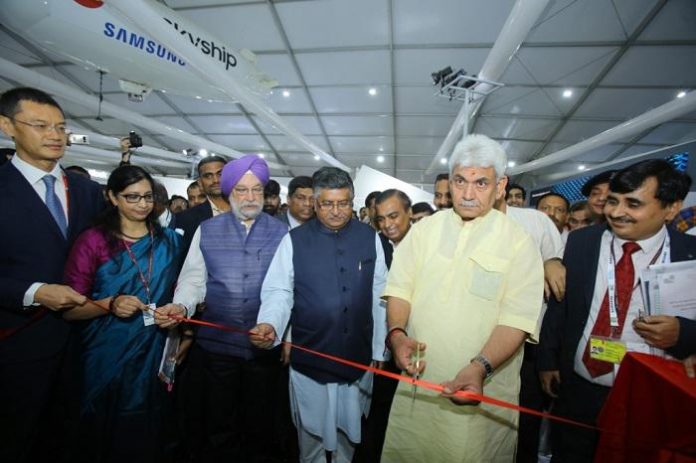 The event witnessed the presence of more than 15,000 people including international exhibitors, media, global speakers and other notable delegates, including several established and budding entrepreneurs.

While addressing the gathering, Hon’ble Minister Manoj Sinha, stated that the Government would leave no stone unturned in extending its support to India’s ICT and TMT sectors. Apart from showcasing India’s rich technology heritage and the road ahead, the three day event highlighted India’s massive ICT innovation potential and brought to light, several game-changing technologies that will shape India’s digital future in the coming times. The event, themed “New Digital Horizons: Connect, Create, Innovate”, witnessed exemplary participation and support from global information and communications technology companies. The platform saw an impressive international presence with over 300 exhibitors, 2000 CXOs and 190 global speakers.

Key Highlights of the Day-1

On Day 1, a number of exhibitors including Reliance Jio Infocomm, Intel, Nokia and Qualcomm participated in 5G trials. This was the first time people could get a glimpse of what is to be expected from 5G in the years to come and how it can affect the scope and development of futuristic technologies.

A number of discussions were pivoted around how such technologies will shape India’s digital future. The sessions showcased India’s 5G potential and the numerous unique use cases 5G will have in India. There were live 5G demonstrations by companies such as Nokia, Ericsson, Qualcomm, Reliance Jio infocomm and the like.

Key highlights of the day:

At India Mobile Congress, Samsung announced its plan for India’s first large-scale 5G trial, scheduled to take place in the first quarter of 2019 in collaboration with the Department of Telecommunications (DoT). In his keynote speech at the event, Youngky Kim, President and Head of Networks Business at Samsung Electronics, said, “Samsung will pave the way for 5G to unlock the full potential of India together with industry leaders.” “We are witnessing a rise in adoption of new technologies, inspired by ‘Digital India’ and spurred by the transition to 4G,” he said.

The Helio P70 packs all these upgrades into an ultra power-efficient chipset to meet the most demanding user needs. The introduction of the Helio P70 follows the global launch of the Helio P60 earlier this year, and builds on its hallmark features to power the “New Premium” market of full-featured smartphones at affordable price points.

The Chennai plant is one of the largest telecom equipment manufacturing plant in the country, recently reaching the 4 million units annual production milestone of 2G, 3G and 4G units. It serves both domestic as well as global customers, shipping to over 100 countries.

As part of an on-going program, known as the ‘Conscious factory’, the Nokia Chennai plant recently implemented the first ‘real-world’ Smart Manufacturing application of Industry 4.0 in India leveraging solutions such as Augmented and Virtual Reality (AR/VR), connected Robotics, Artificial Intelligence, Big Data Analytics, and Internet of Things to enhance operations and increase productivity. The plant is equipped with cutting-edge manufacturing technologies, such as the state-of-the-art surface mounting technology, with a capacity of 12.8 billion components every year, 3D automated optical inspection and X-Ray inspection capability.

Randeep Sekhon, Chief Technology Officer, Bharti Airtel said, “Ubiquitous high speed networks will open doors to a digital world that will be full of exciting digital innovations. Having conducted India’s first in-lab 5G test with Huawei, we are delighted to extend our partnership to demonstrate cutting edge AR and VR based use cases for 5G.”