At the Huawei Innovation Day Asia, the President of Strategy Marketing, Huawei Consumer Business Group, Shao Yang, shared the evolution of mobile innovation and Huawei’s vision of how the next-generation mobile device, the ‘Superphone’, will take mankind closer to a world where the physical and digital realities will be further integrated. 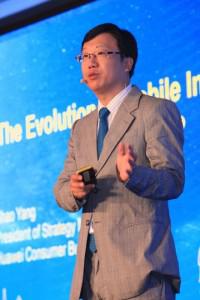 With the mission of building a better connected world, Huawei is committed to creating value through innovation. The advent of the ‘Superphone’ will eventually build a new world of all things digital, all things connected, seamless intelligence integration, and merging intelligence.

Diving into the history of mobile innovation, Huawei Consumer BG has distilled a proposition that begins with Motorola’s first generation feature phone appearing in 1995 and completely revolutionizing the way in which people communicate. 2007 saw the birth of the iPhone, and a year later, the advent of the Android smartphone.

Huawei believes that following 2007, a 12-year cycle will see the emergence of the next generation of mobile phones. It is predicted that the next-generation ‘Superphone’ will emerge circa 2020, opening up a new era, in which physical and digital realities are fused.

What is a ‘Superphone’?

Where does the ‘Superphone’ take us?

With the continuous advancement of Big Data, digital intelligence and cloud technology, we are entering an era of “All-Things-Digital”. The ‘Superphone’ will serve a key role in unifying digital and human intelligence, creating the IoT.

This will disruptively revolutionize the way humans interact with the world. With the evolvement and adaptation of the ‘Superphone’, the physical world will be reconstructed through digitalization.

To embrace this new era, Huawei has already capitalized on the huge potential in connected cars. Huawei has entered into a number of strategic partnerships with major automobile brands in 2015, including Volkswagen, Mercedes-Benz, and Audi, with the latter two partners appointing their third-party suppliers to use Huawei vehicle-mounted 4G communication modules in their future car-networking equipment.

By integrating the company’s capabilities in 4G and 5G networks, Big Data and cloud technology, Huawei has been aggressively pursuing the development of cloud services. The Huawei Cloud Congress 2015 in Shanghai saw the unveiling of new cloud computing products and solutions including the industry’s first OpenStack-based cloud disaster recovery solution, as well as the world’s first software-defined networking-based agile IoT Solution at the Huawei Network Congress in May 2015 which contains the LiteOS, the most lightweight IoT operating system.

In closing, Shao said, “With our commitment to creating value through innovation, Huawei has driven the technology industry by focusing on ecosystem, alliance and partnership. From smartphones, Connected Cars, Wearables to Smart Cities, mobile technology innovation continues to evolve, profoundly changing the relationship between human and the world. Our concept of the ‘Superphone’ opens a dimension of infinite possibilities. Through continued aggressive investments in R&D coupled with the brightest technical minds and talent, we are poised to create technology that will serve and empower mankind.”