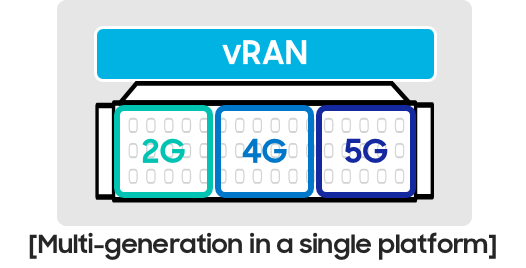 By Kiho Cho, Vice President and Head of Product Strategy at Samsung Networks

We have lived through 2G, 3G and 4G—and now we are in the era of fifth generation cellular network technology: 5G. But, even as 5G networks make an incredible impact around the world, we can’t just switch off earlier network generations and walk away. The logical inclination is to let them fade in and fade out, offering a gradual, seamless transition from one network to the next, which could take over a decade.

However, some network generations continue to deliver key benefits far into the future. For instance, while mobile operators are gradually phasing out its 2G and 3G technologies, some operators—including European operators—still use 2G, with plans to leverage it beyond 2030, as it is the foundation for existing network technologies and basic cellular services.

Launched in the 1990s, 2G is still one of the most successful network technologies, representing a common layer of coverage and offering reliable services. In parts of the world, 2G is valued as one of the most important network technologies for Machine-to-Machine (M2M) communications, Internet of Small Things (IoST)—which supports miniaturized components for devices including wearables—and voice communications for roaming services.

While most of the operators are in the process of sunsetting 2G and 3G, some have kept GSM 2G, largely to support legacy M2M and IoST deployments that are used for supply chain logistics, vehicle tracking and smart meters. For example, vehicle tracking powered by 2G, enables rental car companies to keep track of the locations and movements of vehicles within their fleet, using an installed GPS device. Moreover, there are still mobile subscribers who rely on 2G for voice communications, especially in rural or remote areas in Europe.

Additionally, in other parts of the world, mainly developing countries, a lack of physical infrastructure has limited the reach of 4G and 5G services. With many subscribers still relying on a 2G network, it is important to bridge this digital divide by ensuring that those using a prior generation network are not left behind.

While GSM 2G is still the backbone of voice and IoT services in some parts of world, and 4G is widely used for data services, 3G is fading out relatively faster. Considering market demands, Samsung is focusing its development efforts in the virtualization of 2G and 4G.

Why Virtualization is the Key

Samsung continues to actively seek ways to help operators deploy 2G in the most efficient manner. The key to this effort is virtualization.

Today, Samsung announced it is gearing up to introduce a virtualized Radio Access Network (vRAN) architecture for 2G based on GSM. Once 2G vRAN is in the field, operators can leverage our solution for a seamless migration path—moving from a complex mix of 2G, 4G and 5G to a simple and unified overarching network architecture. Samsung will introduce its 2G vRAN solution in late 2022, beginning trials in the second half of 2022 and start delivering 2G vRAN solutions (including software and radio hardware) to global operators in 2023, including Tier One operators in Europe.