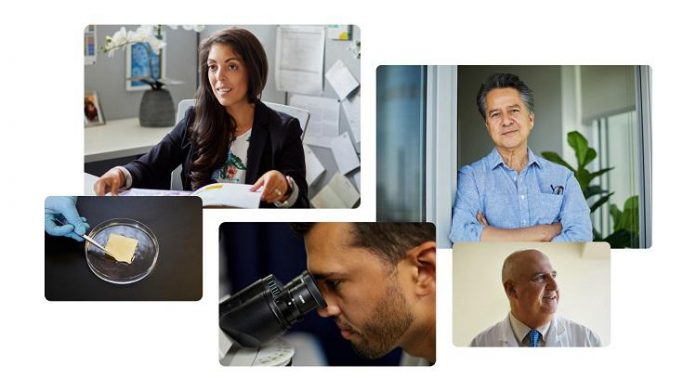 Two years ago, Lauro Salvador injured his foot in a work accident, but for the 55-year-old diabetic, his ordeal was far from over. Salvador was cleared to go back to his job, but the injury hadn’t yet healed and his foot became progressively worse. He eventually found himself at the emergency room at Memphis’s Regional One Health.

Doctors there worked to save his foot, but after an initial surgery failed, they suggested amputation. “I said ‘please don’t do that,’” says Salvador. “I was so scared. I asked if there were any other options.”

That’s when his physician, Dr. Tony Alleman, suggested a course of treatment involving a new wound care product from SweetBio.
Regional One Health patient Lauro Salvador standing in front of a tree.

SweetBio’s APIS honey wound care pliable sheet on an index finger.
From left to right: Lauro Salvador was treated by doctors at Regional One Health in Memphis, who used SweetBio’s wound care product on his foot.

SweetBio was founded by sister and brother team Kayla Rodriguez Graff and Isaac Rodriguez, whose family is from Puerto Rico. Their goal is advanced wound care for all, and to achieve this, they’ve harnessed the power of a surprising source: honey. Specifically, Manuka honey, which is derived from bees pollinating the Manuka tree and has been shown to have antibacterial and healing properties, according to some studies.

SweetBio is one of a number of Latinx-founded companies that has received funding from VamosVentures, a venture capital impact fund that invests in diverse, technology-enabled companies across the country.

As part of Apple’s recently launched Racial Equity and Justice Initiative (REJI), the company has invested a collective $50 million into a number of firms that focus on Black- and Latinx-owned businesses, including VamosVentures.

“We want to be more than just another investment fund,” says Marcos Gonzalez, founder of VamosVentures, whose parents both immigrated to the US from Mexico. “We want to create a portfolio of companies that are led by Latinx and diverse founders and can generate real impact — both social and economic. The fact that Apple has made a meaningful commitment to our fund shows that they recognize the challenges that exist for these kind of businesses and they want to be part of the solution.”

Kayla Rodriguez Graff and Isaac Rodriguez created SweetBio with the goal of delivering advanced wound care to those that need it most.

VamosVentures founder Marcos Gonzalez looks to invest in companies that are helmed by diverse leaders and serve diverse populations.

Gonzalez saw in SweetBio an opportunity to both support a Latinx-founded business and to target an important issue for the greater Latinx community.

“Not only do we believe in the mission and these founders, not only do we recognize the hurdles that are presented to people of color in general — especially women — but we also believe that the product that they’re developing could be very transformational for communities of color,” says Gonzalez.

For Kayla, whose background is in business, and Isaac, who has a PhD in biomedical engineering, developing a product that could potentially help so many was the driving force behind SweetBio.

“Honey has been used since the ancient Egyptians to treat wounds,” says Isaac, who named the wound dressing APIS, after Apis mellifera, the scientific name for the honey bee. “And it’s still being used today in hospitals, but it’s messy and non-containable. So we worked to bioengineer that ingredient and deliver it in a sheet that can be manipulated easily.”

“We saw that the biggest need was in wound care, specifically for diabetic ulcers,” says Kayla. “And diabetes targets communities of color the hardest, so that’s where a lot of our initial exploration has happened.” 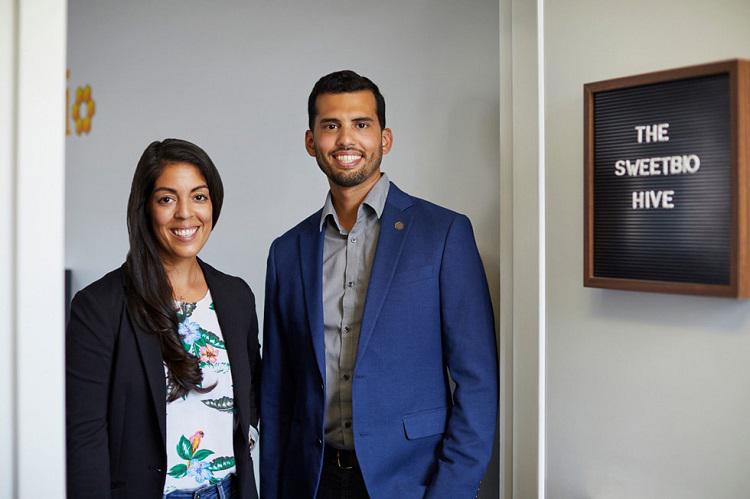 “The city of Memphis is about 60 percent African American, and a high number of our patients are living at or below the poverty line,” says Dr. Reginald Coopwood, Regional One Health’s president and CEO. “So I’m very proud that we’ve set up our Innovation Center that provides access to startups like SweetBio — companies that are trying to find new and innovative ways to solve chronic health care issues around complex populations.”

Dr. Tony Alleman runs the hospital’s Wound Care Center and has seen positive results from the SweetBio product for a number of his patients.

“I think APIS is a good product and it’s very easy to use,” says Alleman. “We had one diabetic patient who had a foot wound for months and we tried a number of things to no avail. We then tried the SweetBio product and within two weeks, his wound was closed.”
Dr. Alleman also used APIS on Lauro Salvador, as part of an alternative course of treatment to avoid amputation. As a result, the wound closed.

“At first I was hesitant to try a new product, but it saved my foot,” says Salvador, who later became aware that APIS was created by a Latinx-founded company. “It’s a proud moment to know that members of my community are doing this.”

Kayla and Isaac hope that success stories like these are just the beginning, as they work to scale their product for national availability by the end of 2022. In addition to the pilot program at Regional One Health, which will culminate in a retrospective study, there is also a clinical trial underway in conjunction with Vanderbilt University.

“To have our dream supported by a company like Apple gives us fuel to keep going,” says Isaac. “It allows our idea, and the bold ideas of future generations, to be translated into products and services that are going to improve the quality of life for people.”

“Isaac and I started this company to help people heal,” says Kayla. “And what I didn’t understand when we first started was that yes, we’re helping wounds heal, but more importantly, we’re helping families and communities heal. That kind of change takes a village and we’re incredibly proud that VamosVentures and Apple are supporting us on our journey.”