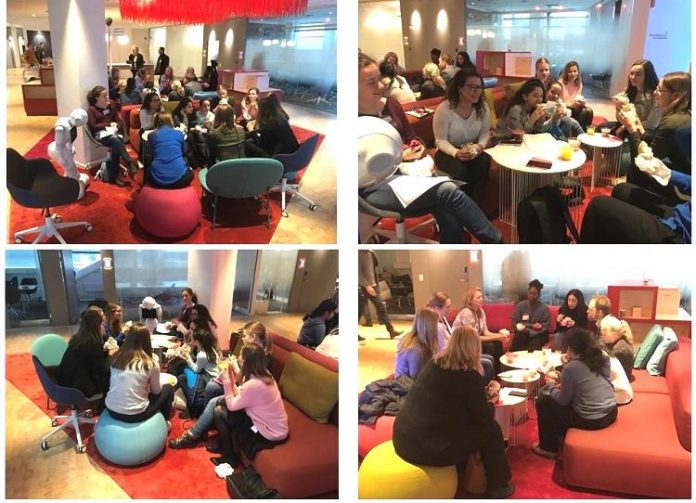 This week, Telia Company seriously steps up its game to inspire girls and young women to choose a career in tech-savvy industries. As part of “Female Role Model Day@Telia”, girls and women aged between 11 and 22 get to join a female Telia employee for a day at work. This event is also part of celebrating International Women’s Day on March 8.

“I haven’t been that interested in technology, said Chiara, 11, one of those who joined a female role model at Telia for a day. “But I want to find out about it. I can see that there are lots of different jobs. And I think, now, it is something I want to do. You also have a cool office, I wouldn’t be bored here.”

To Clara Bodin, Diversity Manager at Telia, it is all a step in the right direction.

“Attitudes are changing too slowly,” she says. “We can speed up a necessary change by being role models to girls and young women, and by showing them there is a place for them in the telecom industry.”

The European Commission estimates that by 2022, there will be a shortage of 500 000 so-called STEM workers, that is people who work in science, technology, engineering and mathematics. And that is in the EU alone. Today, fewer than one in three of the STEM workforces is female.

Furthermore, women tend to do better than men in higher education, but only five percent of women choose to work for telecom companies.

This is the case even though business consultancy firm McKinsey reports that companies in the top quartile for gender diversity are 15 percent more likely to outperform the industry median. ​

“A change here is a win for everyone. As employers we have a huge untapped talent potential here,” Bodin says. “Providing girls with access to female role models is one way to smash stereotypes associated with the tech industry, and to get girls excited about technology.”

During the day on Thursday, March 7, conversations ranged from what it is like to be one of few girls in the school’s science club and daring to really go for what you want to achieve, to possible insecurities and what to think about when you apply for a job.

“I am really into math and science,” said one 16-year-old participant. “I want to work in that area. I think I can do it.”