Home Applications and Content “Government segment has done particularly well for Inmarsat with the start of... 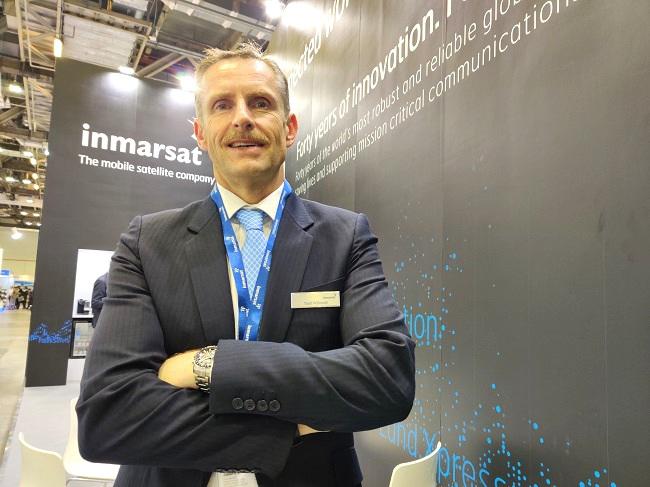 Whether it is enabling greater connectivity for military aircrafts, warships – or driving enhanced solutions for patrol ships patrolling large coastlines – UK based Inmarsat – a satellite telecommunications company, offering global mobile services, is putting together a lot of innovations towards realising the full potential of government sector.

As part of CommunicAsia 2019 in Singapore, Todd McDonell, President, Global Government Business, Inmarsat, interacts with Zia Askari from TelecomDrive.com about the company’s innovation-edge and its future plans.

How is the Government business performing within Inmarsat?

The Government business is actually performing very well, we made our quarter one announcement a while ago. In that announcement, we pointed out that Government has done particularly well with the start of 2019 and we see a lot more opportunity in the government area. Certainly, our Global Express technology is a popular type of service with governments. It has a close relationship with the military; Ka-Band frequencies, and as a result, a popular choice for government.

What are some of the innovations that you are bringing to the market?

There are a number of areas, actually. We see significant opportunity for innovation. Our announcement of GX 7, 8 & 9 is very significant. These are the first of a whole new type of satellite built. As a dedicated telecommunications satellite operator, we’re very focused on providing quality connectivity. GX 7, 8 & 9 allows us to seriously augment the connectivity we already provide.

Historically, a lot of operators launch a satellite to achieve a certain level of coverage. And when that satellite moves towards the end of life, they launch a replacement satellite. But in this case, we’re providing more satellites to increase the level of connectivity and not to replace the existing but to augment existing satellites.

Right now, we have six new satellites on the drawing board or in-built. We have GX 5, our new high capacity satellite in construction right now which is due for launch in the last quarter of this year. And that has 70 times the capacity of our existing Ka-Band satellite on orbit. And we have two more high capacity satellites, GX 6 and GX 7. These are designed to provide both more powerful L-Band connectivity as well as greater Ka-Band connectivity.

We’re going to launch GX5 during the last quarter of this year; I-6 F1, the last quarter of next year in 2020; I-6 F2, the last quarter of 2021; and then GX 7, 8 & 9 will be ready for launch from about 2023. You can see we have a quite a long cycle now of technology, investment, and network enhancements. People are going to increasingly get a greater level of connectivity and capability from us in terms of broadband connections, and we’re very focused on mobility. This is all about providing much better broadband connectivity to ships, planes, government vessels, government aircraft – anything that moves will have greater access to a connection than it has had before.

As a company, how do you see the move towards 5G?

Yes, you’re right. 5G is garnering a lot of interest in the telecommunications world. We have an interest in 5G. We actually rolled out a 4G network in a partnership going into telecom across Europe. That’s called EAN, our European Aviation Network. And that’s a 4G network built to look up instead of out.

When I say look up, it’s designed to give aircraft a 4G high capability or high capacity data connection for in-flight connectivity. So as a result of that project, we learned quite a lot about 4G and that has allowed us to consider what might be possible for 5G. So that’s almost a separate development area for us compared to what we’re doing in terms of the additional spacecraft we’re now building.

So what exactly is Inmarsat doing in the 5G space?

We’re not doing anything in particular for 5G now. But having learnt quite a lot as a result of this 4G program, we know that 5G gives us some additional options in terms of enhancing aircraft connectivity and potentially other platform connectivity aside from what we’re doing on the spacecraft. But 5G is still very formative, there’s a lot of talk about it, but nobody has announced a definitive standard.

So, we’re plugged in, we’re certainly participating in some conversation to understand what might be possible with 5G. But in the meantime, we’re also making other investments to enhance the level of capability we can provide from space anyway.

And, lastly, how does the future look for Inmarsat government side? What can we expect in the coming years?

The future certainly looks very bright. And certainly the investments we’re making in a new spacecraft is a demonstration of how bright we see that future. More and more, connectivity is an expectation. So once upon a time, what might have been considered optional, or would just be nice if I get a connection. Now, it’s a requirement. It’s not just a requirement for people, it’s a requirement for things. And certainly in the government area, the government’s very focused on things like NCW, Network Centric Warfare – the ability for all of government assets to participate collectively through communication.

We’re building all of these enhanced networks, launching these new spacecrafts to increase the amount of connectivity and capacity we can provide to all the different government platforms. And we have programs running as diverse as from providing enhanced connectivity for emergency service vehicles, police cars, and so on, right through to greater connections for military aircraft, warships, through to enhanced crew welfare solutions for patrol ships patrolling large coastlines.

We’re getting more and more requests for greater levels of connectivity, and for ways to optimize that connectivity. We’re actively participating in work with our customers around how to better optimise the channel set, the type of connection to deal with both the welfare requirements to ensure the people at sea are given the quality of life at sea as well as to support the mission requirements, gaining intelligence information, as well as supporting things like emergency services – so safety of life at sea, or even on the ground and remote areas.