Global Internet major Google, has unfurled the first family of Android One phones in India as part of a larger initiative to bring high-quality smartphones to as many people as possible. These phones are available for purchase through online channels in India from today and at retail stores across India from early October 2014. 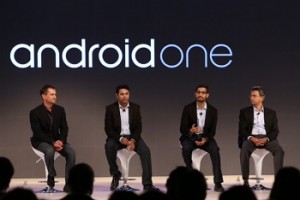 The Android One phones offer a high-quality experience, running the latest version of Android (4.4 KitKat). They will be some of the first phones to get the new Android L release — an update that will offer Google’s new material design, improved battery life, enhanced security features, and smarter notifications. In terms of hardware, the phones feature front- and rear-facing cameras, 1G of memory, fast quad-core MediaTek processor, long battery life as well as features particularly important to Indians, including dual SIM slots, a FM radio tuner, and a microSD card slot for additional storage.

Through Google Play, Android One phones have access to over one million apps that allow people to message friends, make video calls, socialize, check news and weather, and play games. Google apps such as Gmail, Google Maps, YouTube, Google Search, and Google Translate will come pre-loaded on the phones.

Airtel is offering a promotion to reduce data costs for those who buy Android One phones. With an Airtel SIM card, Android One users will get free over-the-air (OTA) updates, and 200MB per month worth of app downloads from Google Play for the first six months — all without counting toward their mobile data plan. Additionally, a data compression feature on Android One’s Chrome browser will help compress the amount of data flowing between the phone and the Internet.

Google also announced that in coming weeks much of YouTube will be available offline in India, meaning that people can store videos in the YouTube app when they are on WiFi and watch them later — a great benefit for times with a slow connection or re-watching videos without using up the data plan.

Sundar Pichai, Google Senior Vice President of Android, Chrome & Apps, said, “If we look at how people are getting online and accessing information today, increasingly it’s through a smartphone. While 1.75 billion people around the world already have a smartphone, the vast majority of the world’s population—over five billion more—do not. By working closely with phone and silicon chip makers to share reference designs and select components, we’re making it easier for our partners to build phones that are not just great to use, but also affordable. With Android One, we not only want to help people get online, we want to make sure that when they get there, they can tap into the wealth of information and knowledge the web holds for everyone.”

At today’s Google press conference, Pichai also announced an expanded set of hardware partners for the Android One initiative, including Acer, Alcatel Onetouch, ASUS, HTC, Intex, Lava, Lenovo, Panasonic, and Xolo, as well as chipmaker Qualcomm. Google also unveiled that Android One phones will launch in Indonesia, the Philippines, and additional countries in South Asia by the end of the year.

TelecomDrive Bureau is headed by Zia Askari. He can be reached at [email protected]