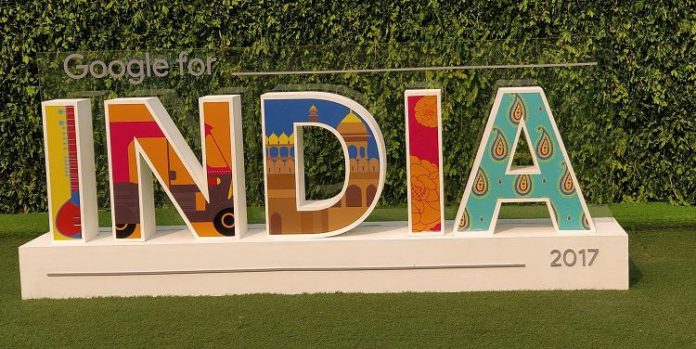 At the third edition of its annual ‘Google for India’ event, Google announced several new India-first products and features that offer a richer experience for the ever-growing base of Indian internet users.

These additions both speak to the specific lifestyles of all Indians — two-wheeler navigation in Google Maps, bill pay in Tez — as well as the needs of India’s newest internet users — Android Oreo (Go edition) to improve the experience on low-RAM phones, new apps like Google Go and Files Go that are built from scratch, and The Google Assistant for the JioPhone that brings the benefits of the Assistant to millions of first-time internet users.

Opening the event, Rajan Anandan, VP, South East Asia, Google, said, “India crossed the 400 million internet user mark this year and Indians were consuming more data than ever before — 4GB on average every month, projected to grow to 11GB per month in the next four years. The growing base of Internet users is hungry for better online experiences and we at Google have been working to build new products and features specifically for them.”

Setting the tone for the new launches Caesar Sengupta, Vice-President, Next Billion Users said, “Our India-first suite of products and features are aimed to help more people discover how the internet can make life easier and more convenient — whether it’s helping pay bills on time, navigating through the quickest routes or searching for answers to questions wherever we are. These products and features are India-first, but they are not India-only. When we build better products for India, we ultimately build better products for everyone.”

Introducing the upcoming Bill Pay feature in Tez, Caesar Sengupta, Vice President, Next Billion Users shared that Google’s India-first mobile payments app Tez, now at 12M users, will start offering a customized experience to pay bills from within the app. Tez will remind users when a bill is due, and users will never pay the same bill twice as the status will be automatically updated. More than seventy billers will be supported, including utilities and direct-to-home service providers. Once users pay a bill on Tez, they will never have to add the billing organization again. The bill pay feature will start rolling out gradually over the next month.

Launching another India first product, Two-Wheeler Mode in Google Maps, Martha Welsh, Director Google Maps said, “India is the world’s largest two-wheeler market and the navigation needs of these millions of riders are different from automobile drivers. Two-wheeler mode in Maps gives routes that use shortcuts not accessible to cars. It also provides customized traffic and arrival time estimations.” The two-wheeler mode uses machine learning to suggest more relevant routes for riders, using smaller roads and two-wheeler-friendly shortcuts. It will also show major landmarks on the route so that riders can better plan their trip before starting, and not keep checking their phone on-the-go. Two-wheeler mode will be available in India starting today, with more countries in the coming months.

VP Engineering, Search, Shashidhar Thakur introduced Google Go, the new app from Google Search, tailor-made for the millions of people in India coming online for the first time. Google Go is easy-to-use and works fast even on entry-level devices and spotty connections, making discovering, sharing and finding content easy and more reliable. Google Go has three special features that meet the needs of users who are new to the internet. First, typing on a small device can be slow and cumbersome, and people may not know what to look for online, so Google Go’s tap-first user interface helps users express themselves, explore new ideas, find things to share and guide them around the web. Second, Google Go comes in a small app size, it is light on data usage, and works great even on patchy connections. Third, it is easy to switch and see answers in another language, for example between Hindi and English. Google Go is available as a preview starting today on the Google Play Store in India.

Group Product Manager, Josh Woodward announced the official global launch of Files Go, a new app by Google that helps free up space, find files faster and share files offline with people nearby. In tests over the last month, the average user saved 1GB of space. Files Go was built from scratch for Go edition devices, and today the official version launched on the Google Play Store.

Reiterating Google’s mission to improve digital literacy amongst women in rural India, Sapna Chadha, Marketing Head, SEA & India, Google today announced the extension of the Internet Saathi program, to support the Foundation For Rural Entrepreneurship Development (FREND) set up by Tata Trusts. She said, “In spite of the socio-economic challenges, thousands of Internet Saathis have gone on to do amazing things, once they learnt the Internet. It was this winning spirit that inspired us to create a new sustainable framework with Tata Trusts, that aims to deliver employment opportunities to Internet Saathis.”